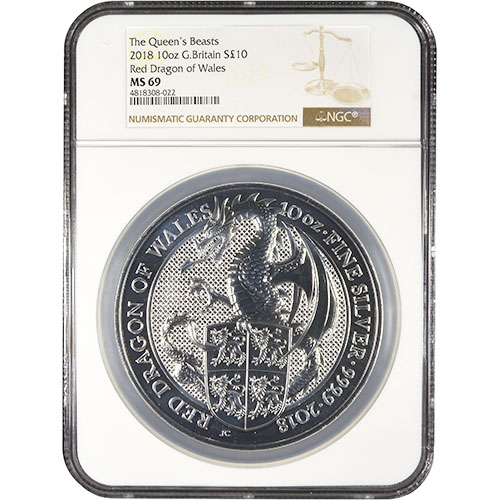 The third coin released in the bullion series of Queen’s Beast coins from the Royal Mint was the Red Dragon of Wales design. A historic image that dates back more than 1,000 years in Welsh history, the Red Dragon has been used by countless monarchs of England as a symbol and today is found on the field of the Welsh national flag. Today, 2018 10 oz Silver British Queen’s Beast Dragon Coins are available to you online at Silver.com in near-perfect condition!

The first records of the Red Dragon of Wales in Welsh and British culture date back all the way to the 6th century. Sometime in the 500s AD, it is said that a red dragon of Cadwallader belonged to the legendary king of Gwynedd. This dragon was said to be a strong, wise, and powerful creature. Fast forward nearly a thousand years, and Owen Tudor would be among the first to incorporate a red dragon in the royal arms.

All 2018 10 oz Silver British Queen’s Beast Dragon Coins in this listing are available to you in near-perfect condition. The NGC assess a coin as Mint State 69 when it presents with full, original mint luster and a maximum of two minor detracting flaws. These flaws are minuscule in nature and often limited to hairlines or contact marks.

The Red Dragon of Wales was carried into battle by the troops of King Henry VII, son of Owen Tudor, a man who claimed Welsh heritage. The troops of Henry VII had a red dragon on their battle standard when they won the day at the Battle of Bosworth and secured the crown of England for Henry VII.

On the reverse of the 2018 10 oz Silver British Queen’s Beast Dragon Coin is the Red Dragon of Wales depicted standing behind a royal shield. The royal arms in question feature a quartered shield with one leopard in each of the quadrants. This was the shield and coat of arms for Llewelyn ap Griffith, the last native Prince of Wales.

The obverse of all British Queen’s Beast Dragon coins features the fifth-generation portrait of Queen Elizabeth II. This right-profile portrait depicts Britain’s longest-reigning monarch at the age of 89.

Please feel free to contact Silver.com with your questions about these silver bullion coins. You can call us at 888-989-7223, chat with us live online, or email us directly.