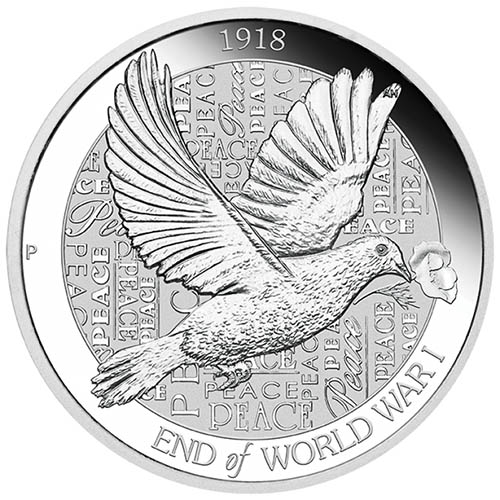 In 2018, nations around the world paused to remember the moment when the guns fell silent in Europe a century ago. The hostilities of World War I came to an end on the 11th hour of the 11th day of the 11th month in 1918, silencing the sounds of machine gun fire, artillery shells, and human suffering. The 2018 2 oz Silver Australian End of World War I 100th Anniversary Coins from the Perth Mint are currently available to you for purchase online at Silver.com.

Australia sent hundreds of thousands of men to fight alongside the Allies during World War I. A Commonwealth nation of the United Kingdom, Australia’s population of fewer than 5 million people at the time was able to send 416,809 men to war during World War I. More than 60,000 of those men were killed during the war and another 156,000 were either wounded, gassed, or taken prisoner during the conflict.

One of the most prolific engagements involving Australian forces during the war came at the Battle of Gallipoli from the spring of 1915 to January 1916. ANZAC forces, or Australian and New Zealand Army Corps, were tasked with conducting a land invasion of the Gallipoli peninsula to establish a beachhead. Though the invasion was ultimately a failure for the Allies, ANZAC forces are still remembered for their valiant efforts in successfully establishing a beachhead for the Allies.

The reverse of 2018 2 oz Silver Australian End of World War I 100th Anniversary Coins includes the image of a dove in flight with a poppy in its beak. The poppy was the first natural flora to grow on the battlefields of Europe again after four years of warfare left the landscape scarred and pockmarked. In the background, the word “Peace” is repeated in various fonts.

On the obverse of 2018 Silver Australian End of World War I Coins is the image of Queen Elizabeth II. This is the fourth-generation effigy of Her Majesty to feature on British coins and the fifth on Australian coinage. It was designed in 1998 by Ian Rank-Broadley for the Royal Mint of England.

These silver coins are available to you with a protective acrylic capsule and resemble traditional piedfort coins. Piedfort coins take their name from the French words for “heavy weight” and reflect the thicker blank these designs are struck on.

We encourage Silver.com customers to call us with questions at 888-989-7223. You can also connect with us online using our live chat service or by sending us an email.