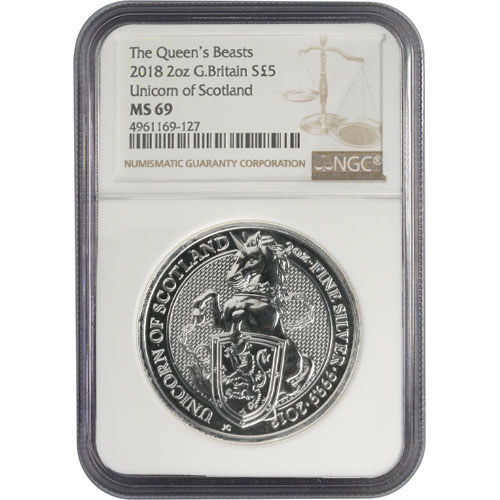 The Unicorn of Scotland is the first heraldic beast in the Queen’s Beast Series that originated from outside the Kingdom of England. The unicorn came to the British Royal Arms through the Scottish king, James VI, who united the crowns of Scotland and England in 1603. Today, 2018 2 oz Silver British Queen’s Beast Unicorn Coins are available to you online at Silver.com in near-perfect condition.

When Queen Elizabeth I died in 1603, England was without a clear heir. Elizabeth I never married and never had any children. Her closest living relative was King James VI of Scotland, the son of Mary, Queen of Scots, who herself was the cousin of Elizabeth I. James was offered the crown and ascended to the throne in 1603, unifying the crowns of England and Scotland as King James I of England.

All of the 2018 2 oz Silver British Queen’s Beast Unicorn Coins in this product listing come to you with a near-perfect certification. The Mint State 69 certification indicates coins with full, original mint luster and a maximum of two minor detracting flaws. Acceptable flaws at this grading level include minuscule contact marks or hairlines found only outside of the primary focal points of the silver coin.

The obverse of 2018 Silver British Queen’s Beast Unicorn Coins features the latest effigy of Queen Elizabeth II. Her Majesty is the longest-reigning British monarch in history, surpassing the reign of her great-great-grandmother, Queen Victoria I. This right-profile portrait is the fifth-generation design of Elizabeth II to feature on British coins. It was created in 2015 by Jody Clark for the Royal Mint of England.

On the reverse of 2018 2 oz Silver Queen’s Beast Unicorn Coins is the Unicorn of Scotland. The beast is often used to portray either strength and ferocity or purity and innocence. The unicorn featured here stands on its hind legs supporting the shield from the Scottish royal coat of arms. Depicting a single rampant lion, this shield was adopted by Scotland in the 13th century during the reign of Alexander III and has not changed since that time.

Please feel free to contact Silver.com with your questions. You can call us on the phone at 888-989-7223, chat with us live online, or simply email us.