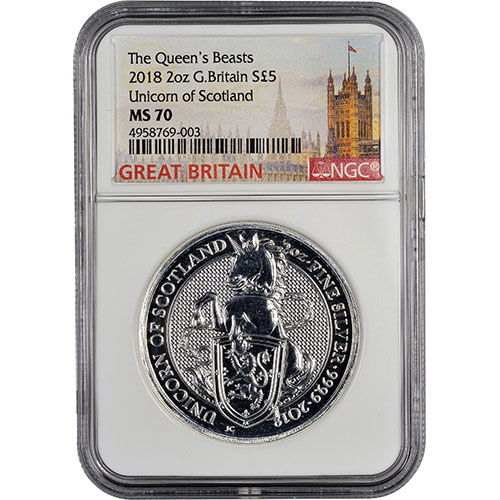 The unicorn is a mythical beast that has been simultaneously portrayed as a large, fierce creature and one that portrays innocence and purity. For centuries, the unicorn has been important to the heraldry of Scotland. Since the 17th century, it has supported the Royal Arms of England alongside the Lion of England. Right now, 2018 2 oz Silver British Queen’s Beast Unicorn Coins are available to purchase online at Silver.com.

Each 2018 2 oz Silver British Queen’s Beast Coin comes to you with a perfect certification from the NGC. Silver for sale with a Mint State 70 certification exhibit full, original mint luster with no detracting flaws of any kind visible on the surface areas or background elements of the coin.

The Unicorn of Scotland has historically been depicted supporting the royal coat of arms of Scotland. The coat of arms features a shield with a single rampant red lion on a field of gold. This design was adopted during the 13th-century reign of Alexander III, King of Scots, and remains the same today.

King James VI of Scotland ascended to the throne of England in 1603 after Queen Elizabeth I’s death. James united the crowns under his rule as King James I of England and brought the Unicorn of Scotland into the British Royal Arms to support the coat of arms alongside the Lion of England.

On the reverse of 2018 2 oz Silver British Queen’s Beast Unicorn Coins is the image of the unicorn supporting the Scottish royal arms. The unicorn is chained to the shield and rears back on its hind legs. The Unicorn of Scotland represents the fourth release in the series and was the first with a 2018 date mark.

The obverse of 2018 2 oz Silver Queen’s Beast Coins features the fifth-generation portrait of Queen Elizabeth II. Created in 2015, this right-profile relief from Jody Clark shows the Queen at the age of 89 wearing the Royal Diadem crown.

If you have any questions for Silver.com, please don’t hesitate to ask. Our customer service team is available at 888-989-7223, online using our live chat, and via our email address.