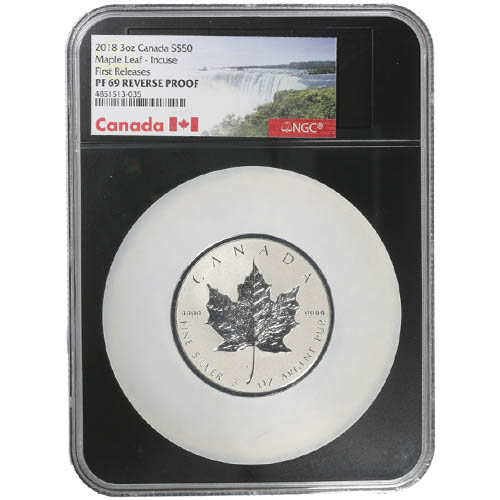 The Silver Canadian Maple Leaf coin is already one of the most beautiful silver bullion coins in the world. In 2018, the Royal Canadian Mint marked the 30th anniversary of this stunning collection with the production of a reverse proof coin for the first time in the program’s history. Now, 2018 3 oz Silver Canadian Incuse Maple Leaf Reverse Proof Coins are available to you for purchase online at Silver.com with NGC certification.

These 2018 3 oz Silver Canadian Incuse Maple Leaf Reverse Proof Coins were produced by the Royal Canadian Mint with reverse proof visuals. These types of proof coins have frosted background fields with design elements overlaying that field that are deeply-mirrored and clear.

On the obverse of 2018 Silver Canadian Incuse Maple Leaf Reverse Proof Coins is a depiction of Queen Elizabeth II. Her Majesty is featured here in right-profile relief in the fourth-generation portrait used on Canadian coins during her reign. Designed by Susanna Blunt in 2003, this image of Her Majesty is the first portrait of a monarch without a crown since the reign of her father, King George VI.

The reverse side of 2018 3 oz Silver Canadian Incuse Maple Leaf Reverse Proof Coins bears the icon known as the sugar maple leaf. Canada’s official emblem today, the sugar maple leaf has been a symbol for some of Canada’s provinces dating back to the late 17th century as French explorers began to settle in the region.

These 2018 3 oz Silver Canadian Incuse Maple Leaf Reverse Proof Coins have near-perfect grades of PF69. Coins in this condition showcase full, original mint luster and no more than two minor detracting flaws. Examples of acceptable flaws at this level include only minuscule contact marks or hairlines. First Release coins were received for grading within 30 days of the initial release.

We encourage Silver.com customers to call us at 888-989-7223 with questions when buying silver. You can also connect with us on the web through our live chat and email address features.