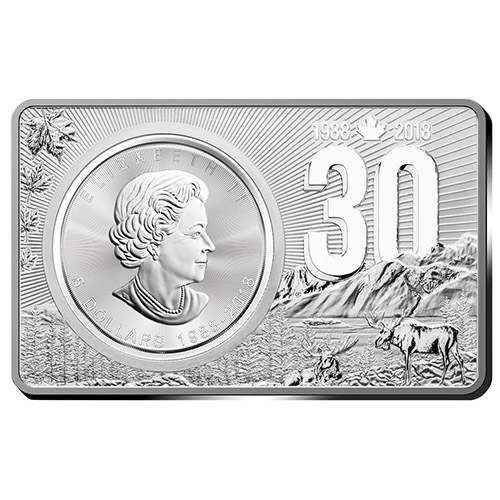 With the issue of the 2018 30th Anniversary Silver Canadian Maple Leaf Bars, investors can celebrate the 30th anniversary year for the Silver Canadian Maple Leaf coins. The Royal Canadian Mint introduced these popular silver bullion coins for the first time in 1988. The Silver Maple Leaf was not the first silver bullion coin issued, as it followed the 1983 first issue of Silver Chinese Panda coins and 1986 issue of Silver American Eagles, but it did have a leg up on the competition.

On the reverse of the 2018 30th Anniversary Silver Canadian Maple Leaf Bar is the image of the sugar maple leaf. As early as the mid-1700s, French Canadian settlers living in what was then Lower Canada used the maple leaf as a symbol of the people living in the region, as well as the region of Lower Canada itself. Today, the sugar maple leaf is the nation’s official emblem and is found on its national flag.

The obverse of 2018 30th Anniversary Silver Maple Leaf Bars is a portrait of Queen Elizabeth. Her Majesty appears on the obverse of all Canadian coinage, and since 2003 this fourth-generation effigy of the Queen has featured on the Silver Maple Leaf coins. This design was created in 2003 by Canadian artist Susanna Blunt to replace the third-generation design from Dora de Pedery-Hunt. Blunt’s design is the first of Queen Elizabeth II to depict her figure without a crown, and made Queen Elizabeth’s fourth-generation portrait the first of a monarch without their crown since her father George VI’s portrait on Canadian coins (1937-1952).

Please feel free to reach out to Silver.com with questions about these bars. You can call us at 888-989-7223, chat with us live online, or simply send us an email with your inquiries.