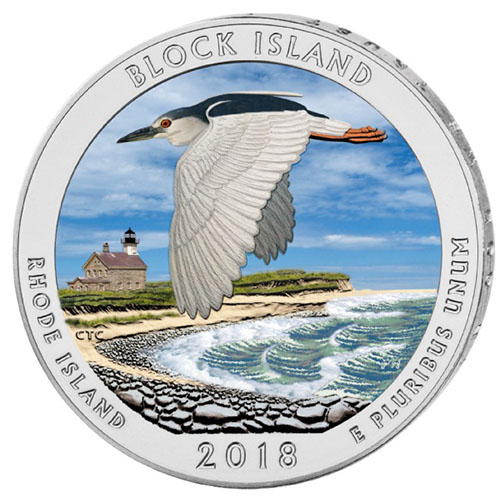 The silver for sale in the America the Beautiful Collection from the United States Mint is simply stunning. The 56-coin collection includes a distinct design for each of the 50 US states, five overseas territories, and the federal district of Washington DC. Representing landmarks, historical markers, and prominent geographical features, the ATB Series is a must for investors and collectors of US coins. The 2018 5 oz Colorized Silver ATB Block Island National Wildlife Refuge Coin is currently available to you for purchase at Silver.com.

Block Island is located nearly equidistant from the coastlines of New York and Rhode Island. The island, named after Dutch explorer Adriaen Block, is 13 miles south from Rhode Island’s coastline along the Atlantic Ocean and 14 miles east of Long Island’s Montauk Point in New York.

The island was originally inhabited by Niantic Indians, with some evidence suggesting the first settlements on the island could have been established as early as 500 BC. Today, Block Island has a population of just over 1,000 people and is known largely as a wildlife refuge for migratory birds and countless other species. The island’s population often triples in the summer months as tourists come to visit the beaches, hike, sail, and fish.

On the reverse of 2018 5 oz Colorized Silver ATB Block Island National Wildlife Refuge Coins is the image of a black-crowned night heron. The bird is depicted flying over the beach at Cow Cove with the northern lighthouse visible in the background. Brilliant colorization has been added to this side of the coin to bring the design elements to life in stunning fashion.

The obverse of 2018 Colorized Silver ATB Block Island National Wildlife Refuge Coins includes the left-profile portrait of President George Washington. The same design featured on the circulation quarter, this image was created by John Flanagan in 1932 and placed on the quarter in that year to honor the bicentennial of Washington’s birth.

We encourage Silver.com customers to call us with questions about these coins at 888-989-7223. You can also reach out to us online through our live chat and email address features.