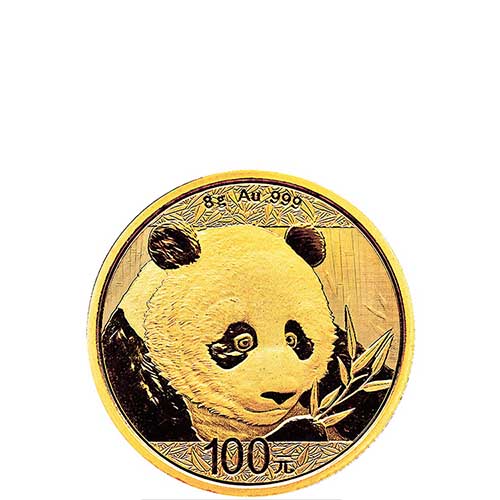 All Gold Chinese Panda coins, along with their Silver Panda counterparts, now have weights measured and listed in Grams. The move was made by the Chinese Mint to match the nation’s use of the metric system, ditching the common global measurement of Troy ounces. The 1 oz, 1/2 oz, 1/4 oz, 1/10 oz, and 1/20 oz coins are now listed as 30 Gram, 15 Gram, 8 Gram, 3 Gram, and 1 Gram coins, respectively.

On the obverse of the 2018 8 Gram Gold Chinese Panda Coin is the new image of a Giant Panda. The Giant Panda species belongs to the bear family, but is often viewed as a living fossil. It diverged genetically from all other bear species so long ago it’s considered a basal member of the species, meaning it represents a far distant relative.

The reverse of all Gold Chinese Panda coins includes the image of the Hall of Prayer for Abundant Harvests. This building is the largest in the greater Temple of Heaven complex. Originally built as a Taoist temple and place of heaven worship for Chinese emperors, leaders would also come to the site to pray for good crop harvests.

All 2018 8 Gram Gold Chinese Panda Coins in this listing are available in BU condition. Coins in BU condition show no signs of wear and tear, but do feature minor flaws from the process of striking blanks. These flaws include breaks in the luster, spotted surfaces, and contact marks.

We encourage all Silver.com customers to contact us with any questions. You can call us at 888-989-7223, chat with us live online, or send us an email with your inquiries.