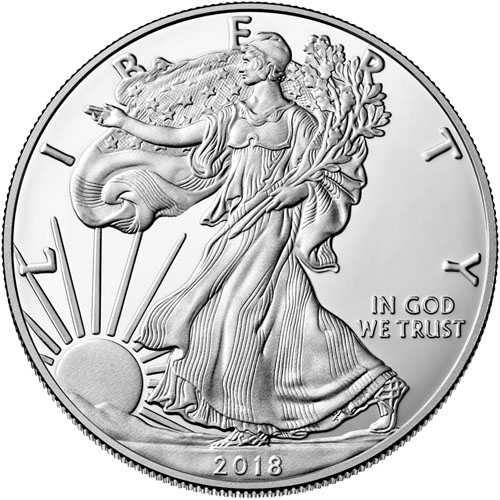 Obverse designs of the 2018-S Proof Silver Eagle include the image of Walking Liberty. The design was created for the US Mint in 1916 by Adolph A. Weinman and featured on the US Half Dollar from 1916 to 1947. The image shows the full-length figure of Liberty in left-profile relief as she walks toward the sun rising over a mountain on the horizon. Liberty is wrapped in the American flag as she walks.

Reverse visuals on 2018-S 1 oz Proof Silver Eagles depict the American bald eagle with the US national shield. Known as the heraldic eagle, this design was modernized in 1986 by John Mercanti for the Silver Eagle Series. The image shows a bald eagle in front-facing relief supporting the US national shield as it clutches the arrows of war and the olive branch of peace.

These 2018-S 1 oz Proof Silver American Eagles are offered to you with the original US Mint packaging. The coins are encapsulated and housed individually inside presentation boxes and come with a Certificate of Authenticity.

Silver.com customer service is available to help at 888-989-7223. We are also available to you online using our live chat and email address features.