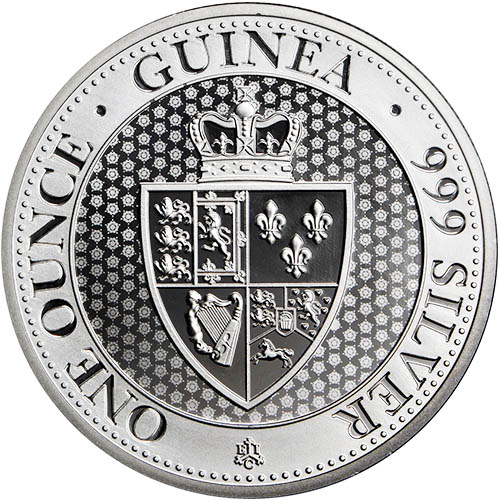 England’s guinea coinage was the most popular and well-known coinage in the world during the 17th and 18th centuries. Used by the crown of England and merchants around the globe, the gold purity and content of the guineas made them popular in commercial transactions throughout the world. Today, 2018 Silver Saint Helena Spade Guinea Shield Coins feature the Spade Guinea design and are available to you online at Silver.com.

The guinea was first issued as a gold coin by England’s King Charles II in 1663. For more than 150 years, the guinea was a recognized symbol of England’s growing economic power on a global stage. The guinea was named for the Guinea region of West Africa from which most of the gold refined into the coins came to England.

All 2018 Silver Saint Helena Spade Guinea Shield Coins available here come with three options when purchasing. You can buy silver in individual coins housed within protective plastic, or you can buy in bulk. The coin is also available in tubes of 20 silver coins or master boxes of 400 coins with 20 tubes of 20 coins each.

Saint Helena is the issuing nation for the Spade Guinea Shield Coin, and it is currently part of the British Overseas Territory that includes Saint Helena, Ascension, and Trista da Cunha. Saint Helena was originally discovered by Portuguese sailors and is most famous as the home of Napoleon Bonaparte when the British imprisoned him in exile.

On the reverse of the 2018 Silver Saint Helena Spade Guinea Shield Coin is the famed Spade Shield design. Though it wasn’t introduced on the gold guinea coinage until 1787 and the reign of King Charles III, the Spade Shield actually originated with King George I in 1714. George I was the Elector of Hanover in Germany and brought the white horse of Hanover to the royal arms alongside the standing lion of Scotland and the three lions of England.

The obverse of the Saint Helena Spade Guinea Shield Coins includes the depiction of Queen Elizabeth II created in 1985. This right-profile portrait is one of the most regal designs of Her Majesty to feature since 1953 and was created by Raphael Maklouf.

Please feel free to reach out to Silver.com with your questions. You can call our customer service team at 888-989-7223, chat with us live online, or email us directly.