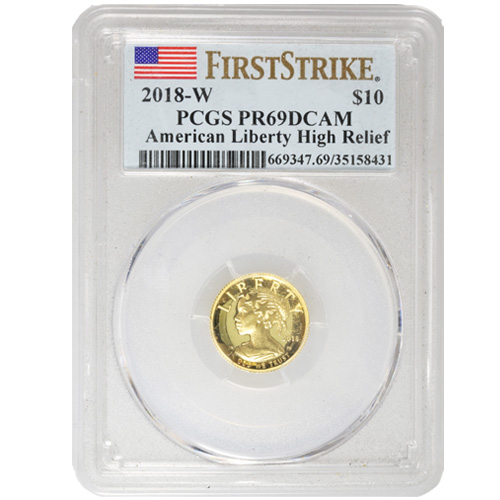 The United States Mint celebrated the 225th anniversary of its founding in 2017 with the release of a first-ever American coin bearing an image of Liberty as an individual other than one of European-American descent. The all-new 2017 Gold American Liberty release featured an innovative new image of Liberty as an African-American woman. Today, 2018-W 1/10 oz Proof Gold American Liberty Coins are available to you for purchase online in near-perfect condition at Silver.com.

The release of the 2017 Gold American Liberty coin was a 1 oz specimen made available to collectors as part of the US Mint’s 225th-anniversary celebration. It marked the first time in national coining history that Liberty was depicted with the features of an individual other than one of European-American descent. This modern, inclusive design of an African-American woman was created by Justin Kunz of the US Mint Artistic Infusion Program.

All of the 2018-W 1/10 oz Proof Gold American Liberty Coins available in this listing are in near-perfect condition. These coins have frosted elements overlaying mirrored fields and have a PF69 certification. As such, the coins have full, original mint luster and no more than two minor detracting flaws present. Those flaws are limited in nature to minuscule contact marks or hairlines and must be located outside the primary focal points.

Lady Liberty is depicted in the obverse design of the 2018-W 1/10 oz Proof Gold American Liberty Coin. Designed by Justin Kunz, the image shows Liberty in left-profile relief with a stoic gaze on her face as she wears a crown made of large, connected stars. The word “Liberty” is boldly inscribed on this face with the date mark and national motto included.

An American bald eagle is shown in mid-flight on the reverse field of 2018-W 1/10 oz Proof Gold Liberty Coins. This depiction is also fresh for this design and shows it as it flaps its powerful wings downward in flight to sustain its glide through the air. The inscriptions on this side include the nation of issue, weight, purity, metal content, and face value of the coin. These high-relief coins are struck multiple times with the die during coining to produce greater depth for the field and 3D reliefs on the design elements.

Please contact Silver.com with any questions you might have about these gold coins for sale. You can call us at 888-989-7223, chat with us live online, or email us directly.