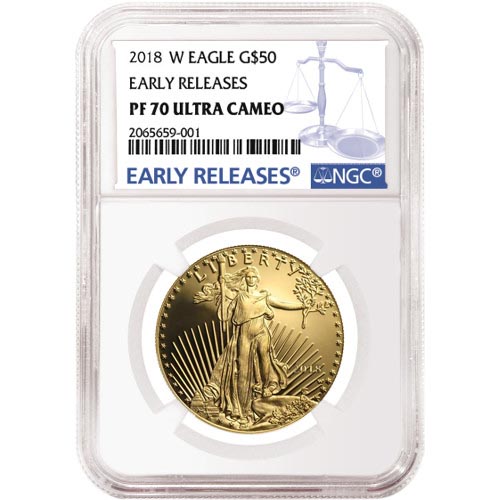 Proof Gold Eagle coins from the United States Mint debuted in 1986, but only the 1 oz coin was available in that issue year. It would take two more years for the US Mint to phase in the fractional weights that were available from the first year in the bullion version. The ½ oz coin arrived in 1987, followed by the ¼ and 1/10 oz coins in 1988.

The Proof American Gold Eagle coin has much lower mintage figures than its bullion counterpart. 1986 and 1987 brought the highest mintage levels in the proof range, with 446,290 and 147,498 respectively. Mintage has never surpassed 100,000 again, with the lowest figure to date in the series hit in 2012 with 23,630 coins struck.

On the obverse of the 2018-W 1 oz Proof Gold American Eagle Coin is Lady Liberty. Created by Augustus Saint-Gaudens in 1907, this design is widely regarded as the greatest American coin design of all time. It featured originally on the $20 Gold Double Eagle coin.

The reverse features a unique design found only on Gold American Eagle coins. It features a bald eagle returning to the family nest where a female sits with a group of hatchlings. This design comes from Miley Busiek and was developed in 1986.

Each coin here arrives with an Early Release label in the slab. This indicates the coin arrived for certification with the NGC within the first 30 days of its 2018 issue date from the mint.