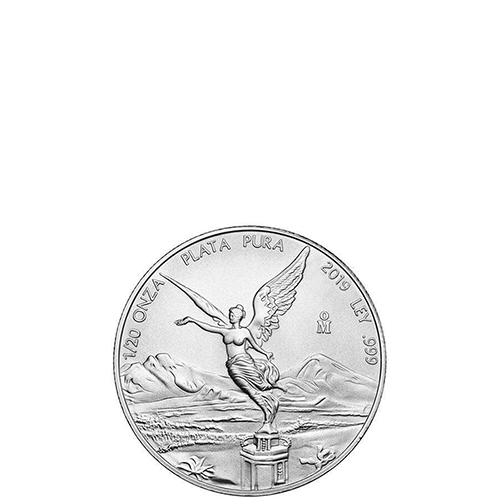 Offered by the Mexican Mint each year, the Silver Mexican Libertad coin is available for purchase in a variety of weights and versions. The main offering is the silver bullion coin available in seven different weights. You’ll also find a proof and reverse proof version of the coin available, with the latter offered only in 1 oz of pure silver. The 2019 1/20 oz Silver Mexican Libertad Coin is currently available to you for purchase online at Silver.com.

Silver Mexican Libertad coins launched in 1982 with only the 1 oz silver coin available. This was the mainstay of the series until 1991 when four more weights were introduced. That year saw the release of the 1/2 oz, 1/4 oz, and 1/10 oz coins alongside these 1/20 oz Silver Libertads.

The 1/20 oz Silver Mexican Libertad Coin has often proven to be the most popular among the four fractional-weight coins available in the series. It often competes with the 1/10 oz coin for the highest mintage figures. In recent years, the 1/20 oz Silver Libertad has seen drastic ebbs and flows in demand.

Mintage figures over the 2009-2011 period were up as much as five-fold from 2007, but then the coin was not even issued in this weight in 2012. The 1/20 oz Silver Libertad was sharply down in 2014 and 2017, with high spikes in between. All of this activity was reflective of the silver market itself and the changes in the price of silver per ounce.

The obverse of the 2019 1/20 oz Silver Mexican Libertad Coin features the image of Winged Victory. Her figure is depicted here in a left-profile relief reflective of her exact appearance on the Mexican Independence Victory Column in Mexico City. She holds the wreath of self-governance above her head in her right hand and holds the broken chains of servitude in her left hand.

On the reverse of all 1/20 oz Silver Mexican Libertad Coins is the coat of arms for Mexico. This seal includes the vision of an eagle perched on the arm of a cactus as it does battle with a serpent. The design is meant to reflect the struggle of Mexico to free itself from the oppressive rule of Spain during the 19th century.

We encourage Silver.com customers to call us with questions on the phone at 888-989-7223. You can also connect with us online through our live chat and email address features.