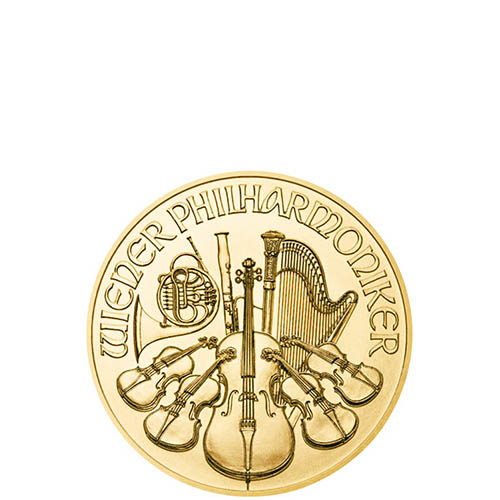 The Gold Austrian Philharmonic Coin series is the official gold bullion coin of the Republic of Austria and is accompanied each year by the release of an official silver bullion and platinum bullion coin with the same designs. The images on the coins were created in 1989 by Thomas Pesendorfer, Chief Engraver of the Austrian Mint.

On the obverse side of 2019 Gold Austrian Philharmonic Coins is a design depicting the Great Organ. This central musical instrument features in performances by the Vienna Philharmonic and is located within the Golden Concert Hall, or Musikverein, which is in the national capital of Vienna in the Innere Stadt neighborhood.

The reverse of 2019 1/4 oz Gold Austrian Philharmonic Coins features a selection of musical instruments. Included in this design field are a cello, violins, harp, bassoon, flute, and horn. Engravings on both sides of the coin are in German.

These 2019 1/4 oz Gold Austrian Philharmonic Coins are part of the 30th-anniversary issue of the coins. Each one is in Brilliant Uncirculated condition and comes with either individual protective packaging or mint tubes of 20 coins each.

We encourage Silver.com customers to reach out to us with questions at 888-989-7223. You can also connect with us online through our live chat service and email address options.