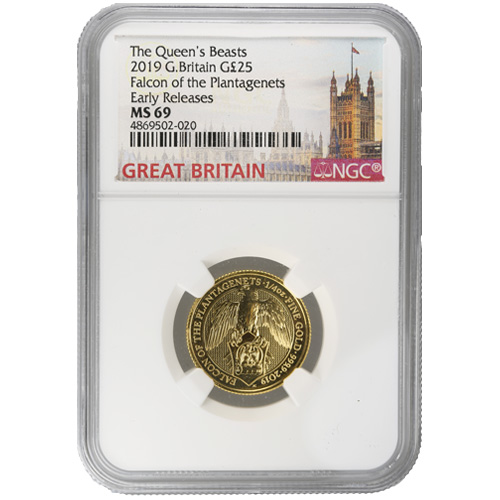 For each design in the 10-coin Queen’s Beast Series at the Royal Mint there are multiple options for investors and collectors to purchase. The individual designs are available in bullion and proof versions with various weights in gold, silver, and platinum. The only fractional weight in the series is the 1/4 oz gold bullion coin. The 2019 1/4 oz Gold British Queen’s Beast Falcon of the Plantagenets Coin is currently available to you for purchase online at Silver.com in near-perfect condition.

For this sixth release, the Falcon of the Plantagenets is featured. The House of Plantagenet is a royal house that originated near Anjou in France. The larger Plantagenet house included the Angevins, who were the Counts of Anjou. There was also a main body of the house that existed following the loss of lands in Anjou and the cadet branches in England: the House of Lancaster and House of York.

On the reverse of 2019 1/4 oz Gold British Queen’s Beast Falcon Coins is the symbol first adopted by King Edward III. He had a great love of hawking and chose the white falcon as his personal symbol for seals and badges. The falcon was set on a shield holding a fetterlock. As it exists in this design, the fetterlock is open as a sign of Queen Elizabeth II’s rightful claim to the throne of England.

The obverse of 2019 Gold British Queen’s Beast Falcon Coins features Queen Elizabeth II in right-profile relief. This fifth-generation design was created in 2015 for the Royal Mint of England by Jody Clark.

These 2019 1/4 oz Gold British Queen’s Beast Falcon Coins are near-perfect specimens in Mint State 69 condition. The coins have full, original mint luster with a maximum of two minor detracting flaws such as minuscule contact marks or hairlines. The Early Release designation indicates the coins arrived for certification at the NGC within the first 30 days of the 2019 release date for the design.

We encourage Silver.com customers to call us at 888-989-7223 with questions when buying gold. You can also connect with us online through our live chat and email address.