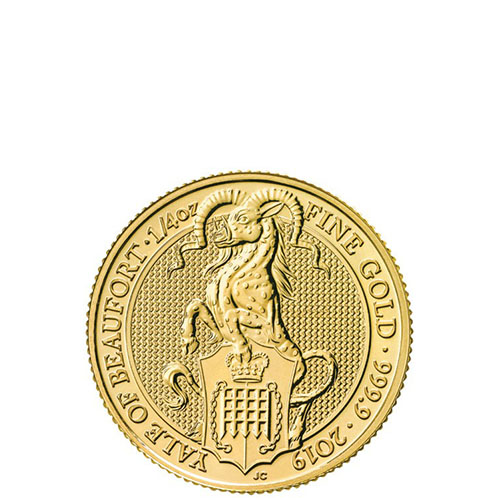 For those who buy gold from the Royal Mint of England, the Queen’s Beast Series is the most impressive collection. With 10 different designs available throughout the series, the primary bullion options include two gold coins and a singular silver coin. The 1/4 oz gold coin is the smallest coin in the series. Right now, 2019 1/4 oz Gold British Queen’s Beast Yale of Beaufort Coins are available to purchase online at Silver.com.

Each 2019 1/4 oz Gold British Queen’s Beast Yale of Beaufort Coin available to purchase online today is in Brilliant Uncirculated condition. The 1/4 oz gold coins of the Queen’s Beast Series are offered by the Royal Mint of England in protective flips, mint tubes of 25 coins, or Monster Boxes of 500 coins housed inside of 20 separate tubes.

The Yale of Beaufort was the official symbol of Lady Margaret Beaufort. She was the only daughter and sole heiress to John Beaufort, Duke of Somerset. She was married four times in her life, with her second marriage to Edmund Tudor resulting in the birth of her only child. That child, a son, would go on to capture the throne from the Yorkist monarchs in 1485 as King Henry VII.

On the reverse of 2019 1/4 oz Gold British Queen’s Beast Yale of Beaufort Coins is the depiction of Lady Margaret’s shield. The shield has quarters of white and blue with a crown atop the shield and the golden portcullis, a symbol from the badge of King Henry VII.

Henry VII restored Lancastrian rule following the Wars of the Roses conflict between the former house and the monarchs from the House of York. Henry VII’s forces defeated King Richard III in 1485 at the Battle of Bosworth Field. Henry VII was the founding monarch of the House of Tudor and father to the infamous King Henry VIII.

The obverse of 2019 Gold British Queen’s Beast Yale of Beaufort Coins includes the latest effigy of Queen Elizabeth II. Her Majesty is the longest-reigning monarch in British history and this fifth-generation right-profile portrait depicts her at the age of 89. She wears the Royal Diadem crown and this effigy was created in 2015 by Jody Clark.

If you have any questions, Silver.com customer service is available to help. Feel free to call us at 888-989-7223, chat with us live online, or send us an email.