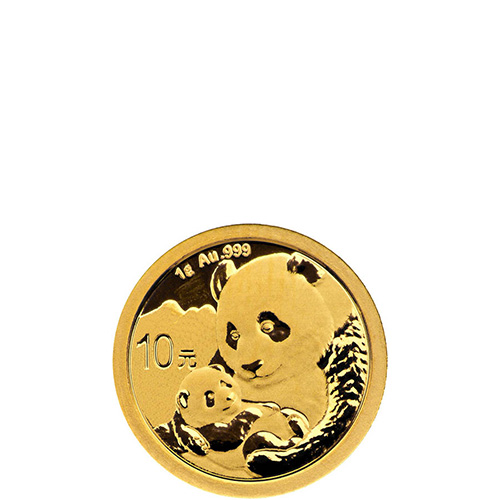 Among the most popular gold coins for sale from the Chinese Mint is the 1/20 oz, or 1 Gram, Gold Panda coin. Part of the official gold bullion series from the People’s Republic of China, the 1 Gram Gold Chinese Panda debuted in 1983, one year after the greater program was introduced. The 2019 1 Gram Gold Chinese Panda Coin is currently available to you for purchase online at Silver.com.

The greater change to the Gold Chinese Panda Coins came in 2016. Until 2015, The Gold Chinese Pandas were issued with Troy ounce weights just as all other major bullion coins are issued. As of 2016, the Chinese Mint issues the coins with Grams for the weight, and that changed resulted in slight adjustments to the actual weight in Troy ounces and diameter of the coins.

On the obverse of 2019 Gold Chinese Panda Coins, you’ll find the image of the exterior facade from the Hall of Prayer for Abundant Harvests. This is the largest building in the Temple of Heaven complex which was built in Beijing between 1406 and 1420.

The reverse side of 2019 1 Gram Gold Chinese Panda Coins features a new image of the Giant Panda. Available only for 2019, it focuses on the Giant Panda species of bears native to the central highlands of China.

These 2019 1 Gram Gold Chinese Panda Coins are available in Brilliant Uncirculated condition. The coins are housed in individual protective plastic or sheets of 10 coins.

We encourage all Silver.com customers to reach out to us with questions at 888-989-7223. You can also connect with us online using our live chat and email address features.