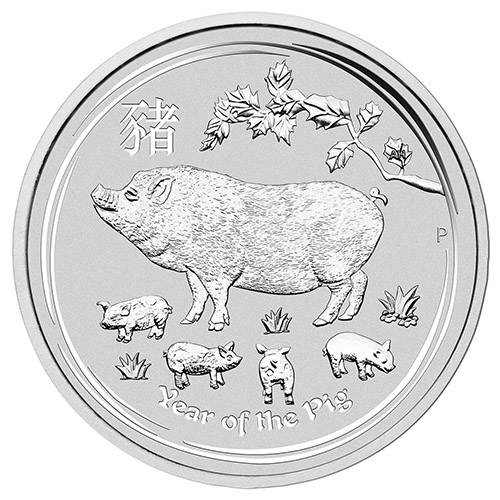 The Lunar Series II collection from the Perth Mint has been in circulation since 2008 when it succeeded the concluding Lunar Series I from the mint. In 2019, the Lunar Series II reaches its own conclusion as the 12th design arrives with the Year of the Pig. The 2019 1 Kilo Silver Australian Pig Coin is currently available to you for purchase online at Silver.com.

The Lunar Series II collection is notable from the Perth Mint for its diversity and variety, as well as its limited run. The coins are only available with a particular design through one calendar year, and when the 12-year cycle of the Zodiac is complete, the series comes to an end. There is another notable feature of the 2019 Australian Pig coins.

The Perth Mint is adopting the fifth-generation effigy of Queen Elizabeth II from Jody Clark on its major bullion coins in 2019. However, the 2019 Australian Silver Pig and Gold Pig coins will continue with the use of Ian Rank-Broadley’s fourth-generation design in order to ensure continuity of design for all 12 coins in the Lunar Series II collection.

The reverse of 2019 1 Kilo Silver Australian Pig Coins includes Ing Ing Jong’s concluding design for the series. The lead designer for Lunar Series II coins since 2013, Jong has worked at the Perth Mint since 2011 and creates separate images for the silver and gold bullion coins in the series.

These 2019 1 Kilo Silver Australian Pig Coins are available in protective capsules in Brilliant Uncirculated condition. The coins have an unlimited mintage and the Perth Mint will coin them to meet demand through the end of 2019.

We encourage Silver.com customers to call us at 888-989-7223 with questions about silver for sale. You can also reach out to us online through our live chat and email address.