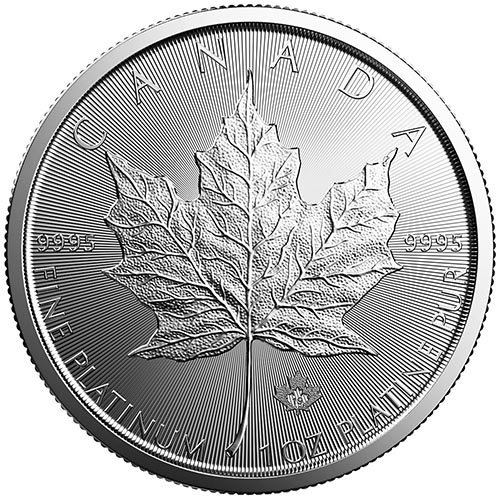 Platinum Maple Leafs were issued regularly through 1999, once in 2002, and then not again until 2009. Since 2009, the Platinum Canadian Maple Leaf has been issued only in the 1 oz weight. The coins, as of 2015, feature the Royal Canadian Mint’s latest protective technologies. The laser-engraved maple leaf privy features on the reverse with the date mark’s final two digits inside. There are also light-diffracting radial lines on both sides of the coin.

On the obverse of 2019 Platinum Canadian Maple Leaf coins is the right-profile portrait of Queen Elizabeth II. Introduced in 2002, this design from Susanna Blunt is the fourth-generation image of the Queen and the first since the reign of her father George VI not to feature a crown on the monarch.

We encourage all Silver.com customers to reach out to us with questions about platinum coins. You can call us on the phone at 888-989-7223 or connect with us online. Those options include a live web chat service and our email address.