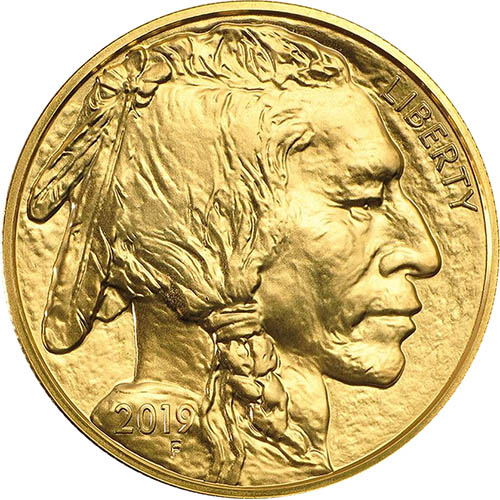 Each of the 2019 1 oz Gold American Buffalo Coins available to you here today at Silver.com is in Brilliant Uncirculated condition. Coins in this listing are available inside of individual packaging or mint-issued tubes of 20 coins, with each coin in BU condition.

Gold American Buffalo coins revive the popular design from the Buffalo Nickel. Issued between 1913 and 1938, the Buffalo Nickel was designed by James Earle Fraser for the US Mint and depicted images inspired by his life growing up in the Midwest. Fraser’s father worked for the railway out of Winona, Minnesota, and he followed his father on work travels with the rail company through Minnesota and the Dakotas.

On the obverse side of 2019 1 oz Gold American Buffalo Coins is the right-profile portrait of a Native American. This portrait was developed by combining the facial features of three different indigenous leaders of the early 20th century. Engravings include the word “Liberty,” the year of issue of “2019” on the shoulder of the figure, and the “F” initial of Fraser.

The reverse face of 2019 Gold American Buffalo Coins includes the image of Black Diamond. The American bison, or buffalo, is the largest and heaviest land mammal on the North American continent. Black Diamond was a resident of the Central Park Zoo in New York City in the early 1900s and is accompanied on this side by engravings of “United States of America,” “E Pluribus Unum,” “In God We Trust,” “$50,” and “1 oz .9999 Fine Gold.”

All Gold American Buffalo coins are issued by the United States Mint through its coining facility at the West Point Mint in the US state of New York.