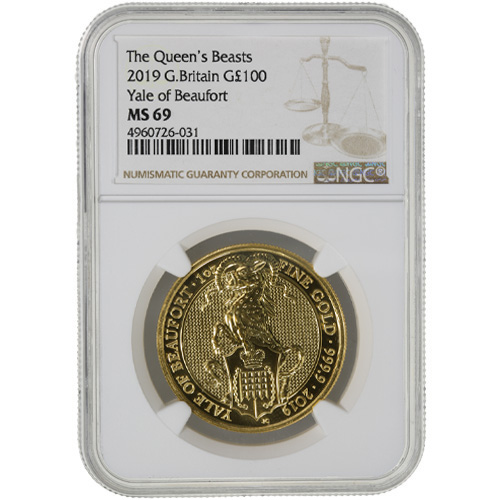 A Yale is a mythical creature that has featured in European mythology and heraldry for centuries. It was first written about by Pliny the Elder in his series Natural History in Book VIII. The four-legged creature often has a body similar to that of an antelope or goat, with the jaws and tusks of a boar, movable horns on the head, and a black or tawny coloration.

The Yale of Beaufort is the seventh creature to debut in the Queen’s Beast Series. The Yale came into the British Royal Arms through the founder of the Tudor dynasty, King Henry VII. Henry used his mother’s portcullis symbol from her family heraldic shield in his personal badge. Lady Margaret Beaufort, Henry VII’s mother, was a leading figure during the Wars of the Roses, which ended with Henry VII’s defeat of King Richard III from the House of York in the Battle of Bosworth.

On the reverse of 2019 Gold British Queen’s Beast Yale of Beaufort coins is that same beautiful design of the Yale. The mythical beast stands elegant, yet powerful, behind the shield. On the shield is a crown above a portcullis. The portcullis is also in the coat of arms for the Westminster City Council, which is the location of Westminster Abbey where Queen Elizabeth II was crowned Queen of England.

The obverse of 2019 1 oz Gold British Yale of Beaufort Coins includes the right-profile portrait of Queen Elizabeth II. Her Majesty is depicted in this fifth-generation artwork from Jody Clark that was created in 2015 and debuted on British coinage starting in 2016.

These 2019 1 oz Gold British Queen’s Beast Yale of Beaufort Coins are in near-perfect condition. MS69 coins have full, original mint luster with a maximum of two minor detracting flaws. These flaws are limited to minuscule contact marks or hairlines.

We encourage Silver.com customers to contact us at 888-989-7223 if they have questions as they buy gold. You’ll also find our customer service team online using our live chat and email address.