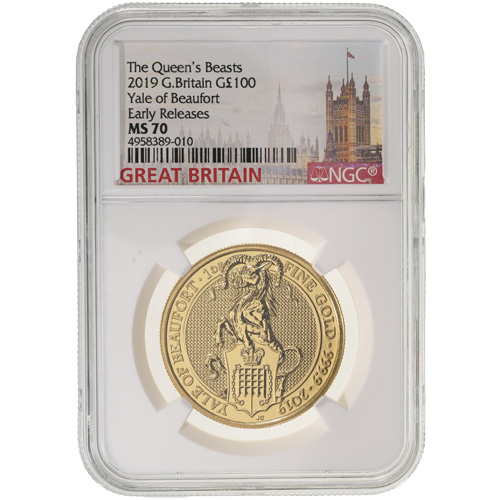 The Yale of Beaufort represents one of four heraldic beasts in the Queen’s Beast Series from the Royal Mint with mythical origins. While the Lion of England and White Falcon of the Plantagenets represent real animals, the Yale stands alongside the Unicorn, Griffen, and Red Dragon as mythical heraldic beasts. Right now, 2019 1 oz Gold British Queen’s Beast Yale of Beaufort Coins are available to purchase online at Silver.com.

Each 2019 1 oz Gold British Queen’s Beast Yale of Beaufort Coin offered here comes with a perfect certification from the NGC. Gold coins in Mint State 70 condition exhibit full, original mint luster with no detracting flaws of any kind. The coins available here include an Early Release label as well, indicating each was received by the NGC for grading within the first 30 days of their initial release by the Royal Mint.

On the reverse of 2019 1 oz Gold British Queen’s Beast Yale of Beaufort coins is the image of Lady Margaret Beaufort’s symbol. The sole heiress of John Beaufort, Duke of Somerset, Lady Margaret carried a quartered shield with blue and white colors supported by the Yale. Her son, King Henry VII, founded the Tudor Dynasty and brought elements of the Yale of Beaufort to the Royal Arms.

The obverse of 2019 Gold British Yale of Beaufort coins features the right-profile portrait of Queen Elizabeth II. This is the fifth-generation effigy of Her Majesty and captures the Queen at age 89 wearing the Royal Diadem. It was created in 2015 by Jody Clark.