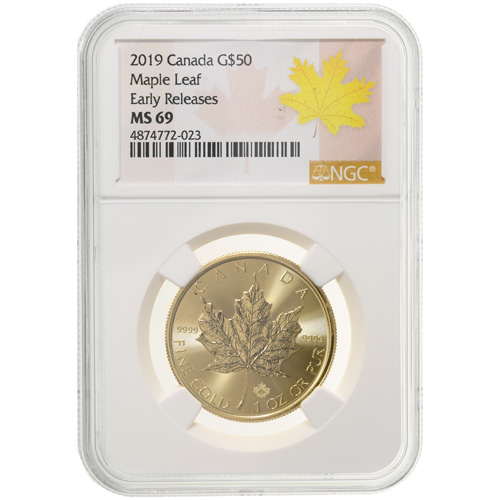 Gold Canadian Maple Leaf coins were first issued in 1979 by the Royal Canadian Mint. The coins were just the second modern gold bullion coins released following the 1967 introduction of the Gold Krugerrand by South Africa as a vehicle for private ownership of gold. The Gold Maple Leaf was originally available only in 1 oz gold with .999 fine content, but now features five weights to choose from and .9999 fine gold content.

The reverse side of all 2019 Gold Canadian Maple Leaf coins includes the sugar maple leaf. Used as a symbol for Canada dating back to the mid-17th century as French explorers moved through the region and started to settle down, the sugar maple leaf is today the national symbol of Canada. It appears most prominently on the Canadian flag. The design on this side was created in 1979 by Walter Ott for the Royal Canadian Mint.

On the obverse of 2019 1 oz Gold Canadian Maple Leaf coins is the image of Queen Elizabeth II. Her Majesty has reigned over the United Kingdom and Commonwealth nations since 1952 and this is the fourth-generation Canadian portrait on national coinage. Designed in 2003 by Susanna Blunt, the image features Elizabeth II in right-profile relief without a crown on her head. This is the first monarch portrait to lack a crown since the reign of Elizabeth II’s father, George VI.

These 2019 1 oz Gold Canadian Maple Leaf Coins are available with a Mint State 69 certification from the NGC. Coins in this condition showcase full, original mint luster with a maximum of two minor detracting flaws. Examples of acceptable flaws at this level include minuscule contact marks and hairlines only.

The included Early Release label denotes the arrival of the coins for grading. To earn the ER label, coins must arrive from the Royal Canadian Mint within 30 days of the initial release of 2019 Gold Canadian Maple Leaf Coins.