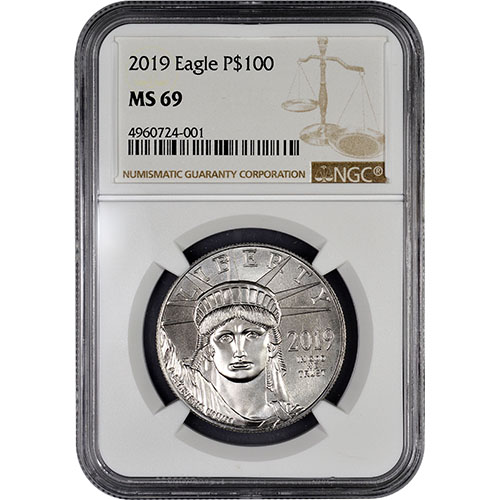 Platinum Eagles from the United States Mint represent the most unique offering among the nation’s major bullion coins. While the designs on the gold, silver, and palladium versions of the American Eagle never change, the proof Platinum Eagles have new reverse designs each year, and now even feature new obverse designs. Today, 2019 1 oz Platinum American Eagle bullion coins are available to you online at Silver.com with NGC certification.

All of these 2019 1 oz Platinum American Eagle Coins come to you with a near-perfect grade from the NGC. Mint State 69 coins are characterized by full, original mint luster and a maximum of two minor detracting flaws. Acceptable flaws for an MS69 coin include only minuscule contact marks or hairlines found outside the primary focal points.

The reverse of 2019 Platinum American Eagles features the image of an American bald eagle as it glides over the continent with its wings spread as wide as possible. The sun rises over the horizon in the distance and the rays of sun push toward the edges of the design.

The obverse of 2019 1 oz Platinum American Eagle Coins includes a stoic look at the Statue of Liberty. Her gaze fixed on the future, this design was created by John Mercanti and offers a close-up glimpse of Liberty’s face. The design is known as Liberty looking to the future.

John Mercanti served as the 12th Chief Engraver of the United States Mint from 2006 to 2010, while Thomas D. Rogers, who created the reverse design, was a US Mint engraver and sculptor.