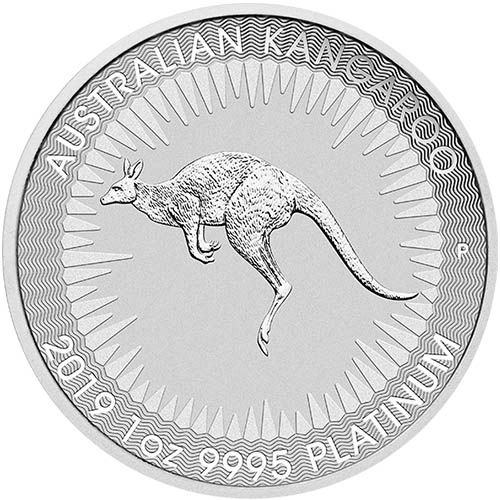 Aside from images of the reigning monarch, the kangaroo is the most common and popular design on Australian coinage. Since 1938, the kangaroo has regularly appeared on Australian currency and is a major part of the Perth Mint’s annual bullion releases. Introduced in 2018, the Platinum Australian Kangaroo coin is the latest bullion offering to feature the marsupial. The 2019 1 oz Platinum Australian Kangaroo Coin is currently available to you for purchase online at Silver.com.

In 1938, Australia introduced a copper penny that featured the monarch’s effigy on the obverse accompanied by a leaping kangaroo on the reverse. This kangaroo was featured in left-profile relief with its arms held in close to its torso and its powerful legs leaping as its large tail balanced it while leaping. Included in this design was the Commonwealth star.

Starting in 1989, the Perth Mint issued Gold Australian Kangaroo coins that would occasionally make use of a modernized vision of this design that lacked only the Commonwealth star. The Gold Kangaroo regularly uses new designs of the kangaroo on its reverse, while the silver bullion Australian Kangaroo coin uses this same design all the time.

On the reverse of 2019 1 oz Platinum Australian Kangaroo Coins is the image of that powerful kangaroo leaping from right to left across the coin’s design field. The edges of the design field have stylized rays from the sun, while engravings surrounding the outer edge include “Australian Kangaroo” and “2019 1 oz 9995 Platinum.” There is also a Perth Mint “P” mint mark.

The obverse of the 2019 Platinum Australian Kangaroo Coin features the latest effigy of Queen Elizabeth II to grace Australian coins. This is based on Jody Clarks’ fifth-generation design for the Royal Mint of England and includes the Queen wearing the Royal Diadem crown. This design is the sixth on Australian coins during her reign and features the Queen’s neckline and shoulders as she wears the Victorian coronation necklace.

The Perth Mint is Australia’s oldest operating facility. Opened in 1899 as the third and final Royal Mint facility on the continent, today the Perth Mint operates independent of the Royal Australian Mint and is owned by the state of Western Australia.

We encourage Silver.com customers to call us with questions at 888-989-7223. You can also connect with us online using our live chat and email address. You can check platinum prices on our site at any time as well!