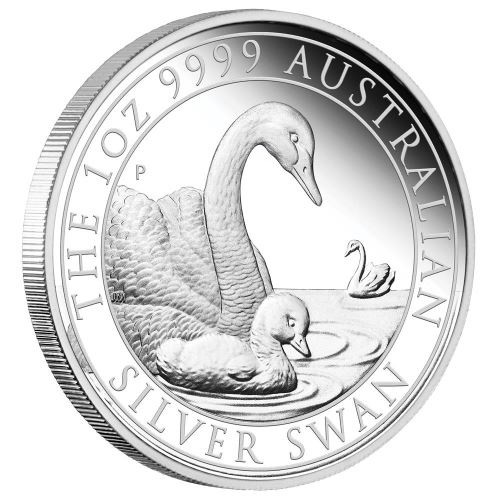 In 2017, the Perth Mint introduced another new native animal species to its lineup of silver coins for sale. The Proof Silver Australian Swan Coins are released each year with presentation packaging and low mintage figures, with the 2017 and 2018 releases having sold out at the mint. The 2019 1 oz Silver Proof Australian Swan Coin is now available to you for purchase online at Silver.com.

The black swan is the only species of swan that is native to the Australian continent at this point in history. A previous swan species inhabited the nearby islands that make up modern New Zealand, but that species has gone extinct. Most of the black swans in Australia were introduced during the colonial era as ornamental birds in palaces and government buildings, but escaped and eventually formed stable populations.

Black swans play a critical role in the heraldry of Australia. Brought to the continent in the late-18th century by the British, the black swan is seen as the antithesis of the Northern Hemisphere’s white swans and is linked with Australian identity. It is the state bird of Western Australia and even features in its state emblem.

On the reverse of 2019 1 oz Silver Proof Australian Swan Coins is the image of a family of black swans. In the foreground, an adult swims along with a young swan while another adult is featured in the distant background field.

The obverse face of 2019 Silver Proof Australian Swan Coins includes the design of Queen Elizabeth II. This is the sixth portrait of Her Majesty to feature on Australian coins and is based on Jody Clark’s 2015 design for the Royal Mint of England. It is the first on an Australian coin since 1966 to include the Queen’s neckline and shoulders.

These 2019 1 oz Silver Proof Australian Swan Coins are available to you inside of a grey Perth Mint clamshell display box. Each of the boxes is housed inside of a swan-themed shipper and comes with an individually numbered Certificate of Authenticity.

We encourage Silver.com customers to call us with questions at 888-989-7223. You can also connect with us live online through our web chat or send us an email with your inquiries.