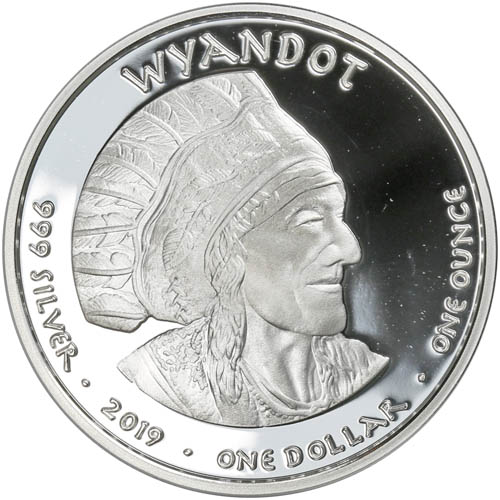 The Native American Mint has an ambitious silver coin series that includes various different designs representing tribal nations across Canada and the United States. Each new release includes the effigy of a different tribal member, represents a new state, and includes the image of a native species to that region. Today, 2019 1 oz Proof Silver Ohio Wyandot Northern Cardinal Coins are available to you online at Silver.com.

The Proof Native American Dollar Series is issued by the Native American Mint with various designs offered annually. The coins represent tribes from across the North American continent with depictions of the people and the animal species found throughout the regions those tribes called home.

All 2019 1 oz Proof Silver Ohio Wyandot Northern Cardinal Coins in this collection are available with protective plastic capsules. The coins all have proof-like finished elements that include frosted designs and mirrored backgrounds.

On the obverse side of 2019 1 oz Proof Silver Ohio Wyandot Northern Cardinal Coins is the image of a member of the Wyandot tribe. The emergence of the Wyandot in the late-18th century occurred in the areas of Ohio and Michigan near Lake Ontario. Many of the Wyandot people in the United States were eventually relocated away from their traditional homeland in Ohio to Kansas and Oklahoma.

The reverse of 2019 Proof Silver Ohio Wyandot Northern Cardinal Coins features the image of an adult cardinal. The cardinal species is a wide-ranging songbird found in southern Canada, the eastern United States from Maine to Texas, and through Central America from Mexico to Guatemala and Belize. The cardinal is well known for the bright-red plumage of the male of the species.

Please feel free to reach out to Silver.com if you have any questions. You can connect with us on the phone at 888-989-7223, chat with us live online, or simply send us an email with your inquiries.