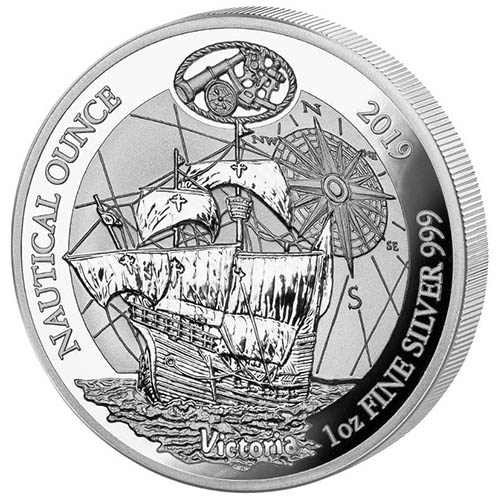 The Rwandan Nautical Ounce Series launched in 2017 with a design depicting the Santa Maria on the 525th anniversary of Christopher Columbus’ Atlantic voyage that led to European discovery of the Americas. Now, the 500th anniversary of Magellan’s successful circumnavigation around the globe is celebrated in the series. The 2019 1 oz Proof Silver Rwandan Victoria Nautical Ounce Coin is now available to you for purchase online at Silver.com.

King Charles I of Spain, also known as the Holy Roman Emperor King Charles V, commissioned the construction of five ships in the Basque region of Spain in 1518. These vessels were named the Victoria, Trinidad, San Antonio, Concepcion, and Santiago. The Basque region of Spain was known at this time as a shipbuilding hub and a place where seaworthy vessels were regularly produced.

Charles I later gifted these five ships to the Portuguese explorer Ferdinand Magellan. He would use the Victoria as his flagship in an expedition meant to successfully circumnavigate the globe. While the expedition started with five ships in all, only the Victoria was successful in departing from Spain, sailing around the globe, and returning.

On the obverse of 2019 1 oz Proof Silver Rwandan Victoria Nautical Ounce Coins is a depiction of the Victoria. The ship was named after a church in which King Charles I regularly prayed and it was constructed as a carrack. A carrack is a three- or four-masted ship designed for use on the ocean.

The reverse side of 2019 Proof Silver Rwandan Victoria Nautical Ounce Coins features the seal of Rwanda. The Republic of Rwanda’s seal includes a traditional tribal hut with the shields of warriors flanking the design field. Inscriptions of Republic of Rwanda and Central Bank of Rwanda on this side are in Kinyarwanda, the native tongue of Rwanda’s Banyarwanda ethnic group.

These 2019 1 oz Proof Silver Rwandan Victoria Nautical Ounce Coins are available to you today within protective plastic capsules. The 1 oz silver coins are accompanied by numbered Certificates of Authenticity and feature frosted designs with mirrored backgrounds.

We encourage Silver.com customers to call us at 888-989-7223 with questions. You can also contact us through our live web chat and email address features.