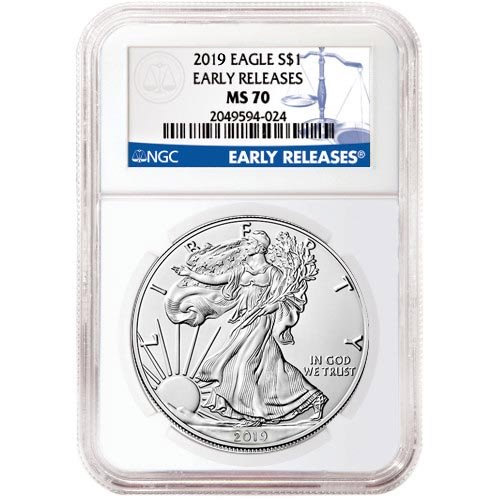 Silver American Eagle coins are the official silver bullion coins of the United States. Introduced in 1986 as bullion and proof coins, the US Mint has since added a third coin in the form of the burnished version. All Silver Eagles are available only in a 1 oz silver weight. Today, 2019 1 oz Silver American Eagle Coins are available to you online at Silver.com in perfect condition.

The first Silver American Eagle bullion coins were struck by the San Francisco Mint on October 29, 1986. When compared to the proof and burnished coins for sale in the series, the bullion Silver Eagle bears no mint mark and has a shinier finish. Bullion coins were issued by the San Francisco Mint from 1986 to 1998. The Philadelphia Mint issued the coins in 1999 and 2000. Since 2001, the West Point Mint has struck all three versions of the coin.

All 2019 1 oz Silver American Eagle Coins in this listing are in perfect condition. The NGC assigns a Mint State 70 certification to coins with full, original mint luster and no detracting flaws on the surface areas or design elements. The included Early Release label in the slab indicates each coin was received for certification by the NGC within the first 30 days of their release by the US Mint.

On the reverse of 2019 Silver American Eagles is the image of the heraldic eagle of the United States. This design has been in use since 1794 and modernized at various times over the last two centuries. This modernization was completed by US Mint engraver John Mercanti in 1986 for the Silver Eagle series.

The obverse of 2019 1 oz Silver American Eagle Coins features the left-profile depiction of Lady Liberty. This design is known as Walking Liberty and was created in 1916 by Adolph A. Weinman. It depicts Liberty walking toward the rising sun on the horizon and was used on the US half dollar from 1916 to 1947.