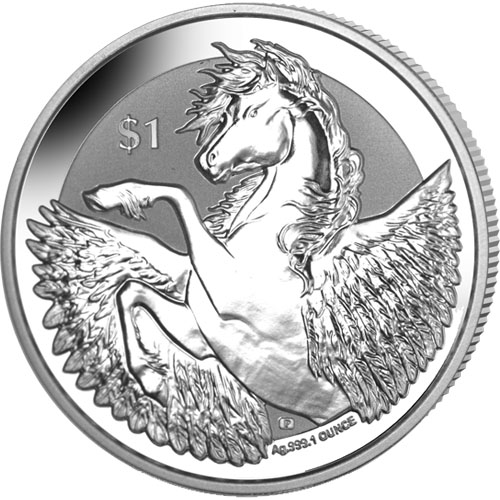 The British Virgin Islands is a small British Overseas Territory in the Caribbean. The chain of islands uses the US dollar as its official currency but maintains a deep connection to the United Kingdom. Until recently, silver bullion and numismatic coins were not a common issue for the BVI. The Pobjoy Mint of England has changed all of that with a handful of distinctive series though. Today, 2019 1 oz Silver British Virgin Islands Reverse Frosted Pegasus Coins are available to you online at Silver.com.

When the Pobjoy Mint issued the new Silver Reverse Frosted Pegasus Coin in 2017 it marked the first time the BVI ever had a silver bullion program released on its behalf. The series uses the famed winged horse from ancient Greek mythology as a nod to the historic use of horses on other circulation currency issued in the British Virgin Islands.

All 2019 1 oz Silver British Virgin Islands Reverse Frosted Pegasus Coins in this listing come with a protective plastic flip to house the coin. Each one is available in Brilliant Uncirculated condition and comes with a unique reverse frosted finish. Similar to a reverse proof finish, this gives the coins frosted, matte background fields with deeply-mirrored, clear design elements overlaying the coin’s surface.

On the obverse side of 2019 Silver BVI Reverse Frosted Pegasus Coins is the right-profile portrait of Queen Elizabeth II. Her Majesty is depicted here in a design from Jody Clark, the same artist responsible for the Royal Mint of England’s new fifth-generation portrait. Her Majesty is depicted in this design wearing the Royal Diadem crown and her neckline and shoulders are also visible as part of the portrait.

The reverse face of 2019 1 oz Silver British Virgin Islands Reverse Frosted Pegasus Coins includes a unique design of the Pegasus. Pobjoy Mint has used new reliefs of the Pegasus each year, but these designs always capture the majesty of a horse rumored to have been born of the blood of Medusa after Perseus cut off her head.

The Pobjoy Mint is the largest privately-owned mint in Europe and is located in Surrey, England. The mint was established by the Pobjoy family in 1965 and remains in family control with second-generation managing director Taya Pobjoy currently overseeing the mint.

Please don’t hesitate to contact Silver.com with your questions as you buy silver. You can call us at 888-989-7223, chat with us live online, or simply email us.