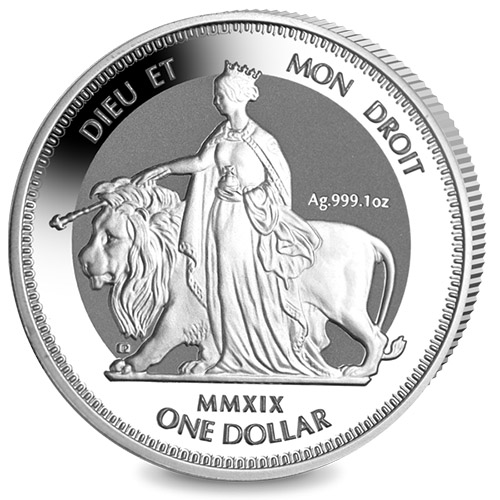 One of the most beautiful coins ever struck in Britain was the Una and the Lion gold coin issued by the Royal Mint of England in 1839. While remaining specimens from this issue are incredibly rare, you do have an option to get your hands on this stunning design of Queen Victoria and a Lion. Right now, Pobjoy Mint’s 2019 1 oz Silver British Virgin Islands Una and the Lion Coins are available to purchase online at Silver.com.

Each of the 2019 1 oz Silver British Virgin Islands Una and the Lion Coins in this listing comes to you in Brilliant Uncirculated condition and arrives inside of protective packaging. The coins issued for the British Virgin Islands by the Pobjoy Mint feature a face value in US Dollars, the official currency of the BVI despite its status as a British Overseas Territory.

The Una and Lion design used in 1839 by the Royal Mint was created by William Wyon to celebrate the start of Queen Victoria’s reign as the Queen of England. Victoria I, great-great-grandmother of Queen Elizabeth II, ruled from June 1837 until her death in January 1901. She was the longest-reigning monarch in British history until the rule of her great-great-granddaughter, Queen Elizabeth II.

On the reverse of 2019 1 oz Silver British Virgin Islands Una and the Lion Coins is the modernized take on Wyon’s design. This includes a massive lion walking with Queen Victoria standing to its left. The design was originally based upon Edmund Spenser’s 1590 poem The Faerie Queene. The 1839 coin marked the first time a monarch was depicted on a coin in the role of a fictional character.

The obverse of 2019 Silver BVI Una and the Lion Coins includes the fifth-generation portrait of Queen Elizabeth II used exclusively by the Pobjoy Mint. Created by Jody Clark, the same man whose design features on British coinage as of 2016, the right-profile portrait captures the Queen at age 89 and features her figure with the Royal Diadem crown on her head and her neckline and shoulders visible.

If you have any questions about silver bullion coins, please don’t hesitate to contact us. You can call our customer service team at 888-989-7223, chat with us live online, or simply send us an email.