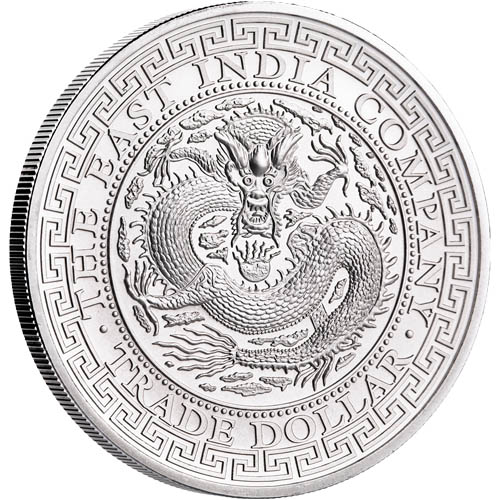 Any quantity available for $20.17 per coin over spot!

The existence of various forms of trade dollars arose in the 19th century as the popularity of the silver Spanish dollar in China and East Asia grew. Spain’s colony in the Philippines became a hub of trade through the region and as other nations looked to gain access to Chinese and other ports in the region, the number of trade dollars issued around the world grew. Now, 2019 1 oz Silver Chinese Trade Dollar Coins are available to you for purchase online at Silver.com.

At various points in the 19th century, countless nations issued their own trade dollar designs. This was based on the collective assumed value of silver as a form of currency at the time, rather than relying on the growing variety of national fiat currencies. Most trade dollars were based on the Spanish silver dollar, providing a foundation for the weight, diameter, and purity of other trade dollars.

Examples of popular trade dollars during this century included the US Trade Dollar with the Seated Liberty design and the British Trade Dollar with a depiction of Britannia. By 1889, the Qing Dynasty in control of China had lost two Opium Wars against Great Britain and had begun issuing its own trade dollars for merchants to use in its ports and other ports throughout the region.

On the obverse of 2019 Silver Chinese Trade Dollar Coins is the image of Queen Elizabeth II. This face of the coin bears the latest effigy of Her Majesty used on British coinage. Designed by Jody Clark for the Royal Mint of England in 2015, this portrait depicts the Queen at the age of 89 wearing the Royal Diadem crown on her head.

We encourage Silver.com customers to reach out to us with any questions about these silver coins for sale. Please don’t hesitate to call us at 888-989-7223, chat with us live online, or simply send us an email with your inquiries.