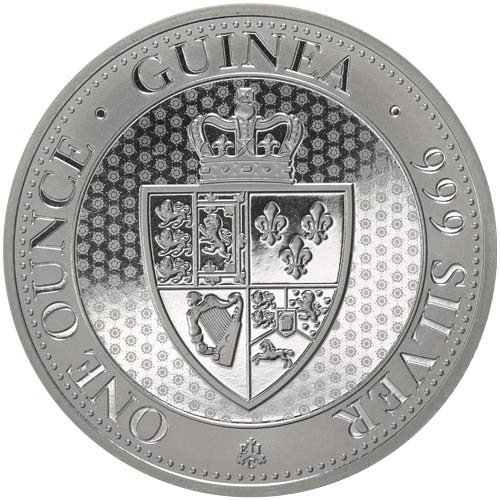 If you’re buying silver from private mints, the beautiful designs of the recently introduced Silver Saint Helena Spade Guinea Shield coin is a must-have for your portfolio and collection. The Silver Stain Helena coin is issued by the Sunshine Mint in the US and bears imagery used on the Spade Guinea gold coins issued by the United Kingdom. Today, 2019 1 oz Silver Saint Helena Spade Guinea Shield Coins are available to you online at Silver.com.

Located in the South Atlantic Ocean, the island of Saint Helena measures just 10 miles by 5 miles in size and has a modern population of 4,534 people. One of the most remote islands in the world, Saint Helena was the perfect stopping grounds for British ships and East India Trading Company ships moving between Europe and ports in India and China. It was, most famously, used as a prison in the 19th century for the exiled Emperor Napoleon Bonaparte of France.

All 2019 1 oz Silver Saint Helena Spade Guinea Shield Coins in this product listing comes in Brilliant Uncirculated condition and is available for bulk or individual purchase. The coins are housed inside of individual protective plastic, mint tubes of 20 coins, or Master Boxes of 400 coins.

On the reverse of all Silver Saint Helena Spade Guinea Shield Coins is the image of the British Royal Arms used during the reign of monarchs from the House of Hanover. This particular shield was borne by the crown in 1787 during the reign of King George III. The shield bears the Three Lions of England, the Rampant Lion of Scotland, the Harp of Ireland, the Three Lilies of France, and the symbols of the House of Hanover crowned by the Imperial Crown of the Holy Roman Empire.

The obverse of 2019 1 oz Silver Saint Helena Spade Guinea Shield Coins features the third-generation portrait of Queen Elizabeth II. Her Majesty is featured in this portrait in right-profile relief and it was designed in 1985 by Raphael Maklouf for British coinage.

Please don’t hesitate to reach out to Silver.com with any questions you have about these coins. You can call us at 888-989-7223, reach out to us online using our live chat, or simply send us an email.