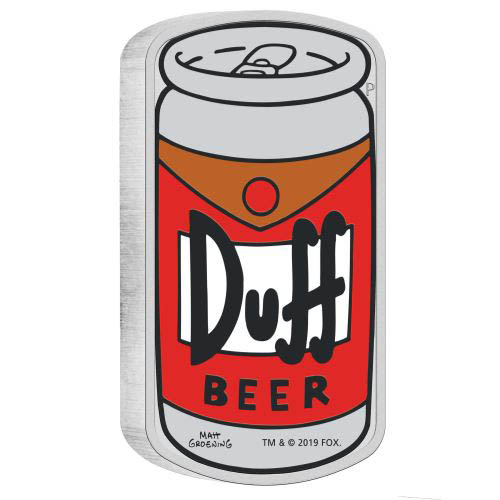 The Simpsons is the longest-running animated series in the history of television. It debuted on The Tracey Ullman Show in 1987 and by 1989 The Simpsons was its own standalone series on Fox with a 30-minute time slot. Today, 2019 1 oz Silver Tuvalu The Simpsons Duff Beer Proof Coins are available to you online at Silver.com.

Duff Beer is the favorite lager of the residents of Springfield, the fictional American town in which the Simpsons family lives. Duff Beer is served on tap at establishments like Moe’s Tavern, frequented by Homer, and in cases at the local Kwik-E-Mart where you’ll find Homer’s son Bart constantly taunting the owner.

All of the 2019 1 oz Silver Tuvalu The Simpsons Duff Beer Proof Coins in this product listing come with a protective acrylic case from the Perth Mint. This clear acrylic case allows you to view both images on the obverse and reverse without removing the coin from its protective packaging. The case is presented with a themed shipper featuring stenciled artwork of all the characters from The Simpsons. The coins also come with an individual Certificate of Authenticity.

On the reverse of the 2019 1 oz Silver Tuvalu The Simpsons Duff Beer Proof Coin is an image of the town’s favorite brew. The colorized design here captures the quintessential coloring of the Duff Beer brand.

Several companies have made attempts to produce real-life beers under the Duff Brand, but there is only one acceptable Duff Beer that was ever made in the real world. Near The Simpsons ride at Universal Studios, there are actually three varieties of Duff Beer sold for park visitors to enjoy.

The obverse of 2019 Silver Tuvalu The Simpsons Duff Beer Proof Coins includes a depiction of Queen Elizabeth II. Her Majesty is featured here in right-profile relief in a design that was created in 1998 by Ian Rank-Broadley as the fourth-generation effigy for the Royal Mint of England.

Please feel free to reach out to Silver.com if you have any questions about our silver for sale. You can call us on the phone at 888-989-7223, chat with us live online, or simply send us an email with your inquiries.