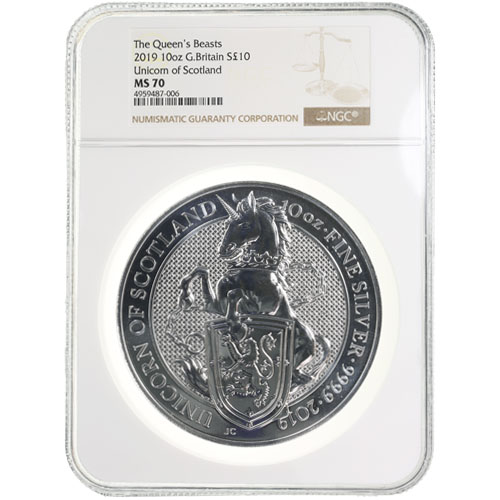 Together with the dragon, unicorns might be the most well-known mythical beasts in the world. Unicorns are depicted as large, powerful horses with a singular horn growing from the top of the head. The unicorn is the most powerful heraldic beast in the history of Scotland and is often depicted alongside the Scottish royal coat adopted by Alexander III of Scotland. Today, 2019 10 oz Silver British Queen’s Beast Unicorn Coins are available to you online at Silver.com in perfect condition.

The unicorn is commonly viewed by modern scholars as a beast misidentified by ancient peoples. First accounted for around 400 BC, many believe its interpretation was a misidentification of rhinos, bulls, or wild horses. Depictions of the unicorn were originally meant as symbols of ferocity and strength, but more commonly became associated with purity and innocence.

The Unicorn of Scotland has adorned the British Royal Arms since the ascension to the throne of King James VI of Scotland. The son of Mary, Queen of Scots, he was the closest living relative of Queen Elizabeth I upon her death in 1603 with no heirs. James united the crowns and ruled as King James I of England and Scotland.

On the reverse of 2019 10 oz Silver British Unicorn Coins is the Unicorn of Scotland. James I selected the unicorn to support the Royal Arms alongside the Lion of England as a symbol of the united crowns. Here, the unicorn stands supporting the Scottish royal coat adopted during the 13th-century rule of Alexander III, King of Scots. His royal coat included a single rampant lion on the shield.

The obverse of 2019 10 oz Silver British Queen’s Beast Unicorn Coins bears the right-profile portrait of Queen Elizabeth II. Her Majesty is depicted at the age of 89 in this fifth-generation design from Jody Clark.

Please don’t hesitate to reach out to Silver.com with questions about buying silver. You can call us at 888-989-7223, chat with us live online, or email us with your inquiries.