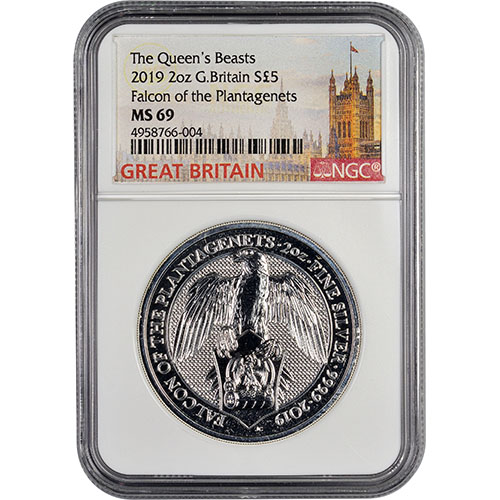 The silver coins for sale in the Queen’s Beast Series at the Royal Mint of England include a total of 10 different designs. Each one is offered in silver bullion, gold bullion, and platinum bullion, with both investment-grade and collectible proof options to choose from when buying. Today, 2019 2 oz Silver British Queen’s Beast Falcon of the Plantagenets Coins are available to you online at Silver.com with NGC certification.

King Edward III ruled over England from 1327 to 1377. He came to power when his mother, Isabella of France, deposed his father. Edward III enjoyed military success against the Scots and French, launched the Hundred Years War with France, and saw England through a horrific outbreak of the bubonic plague beginning in 1348 that killed half the population of the kingdom.

Each of these 2019 2 oz Silver British Queen’s Beast Falcon of the Plantagenets Coins earned a near-perfect certification from the NGC. Mint State 69 coins showcase full, original mint luster with a maximum of two minor detracting flaws. Acceptable flaws at this grade level include only minuscule contact marks or hairlines found outside the primary focal areas of the coin.

On the obverse of 2019 2 oz Silver British Queen’s Beast Coins is the effigy of Queen Elizabeth II. The longest-reigning monarch in British history, Queen Elizabeth II is depicted here in a right-profile portrait created in 2015 by Jody Clark for the Royal Mint of England.

Please don’t hesitate to reach out to Silver.com with your questions. You can call us on the phone at 888-989-7223, chat with us live online, or simply send us an email with your inquiries.