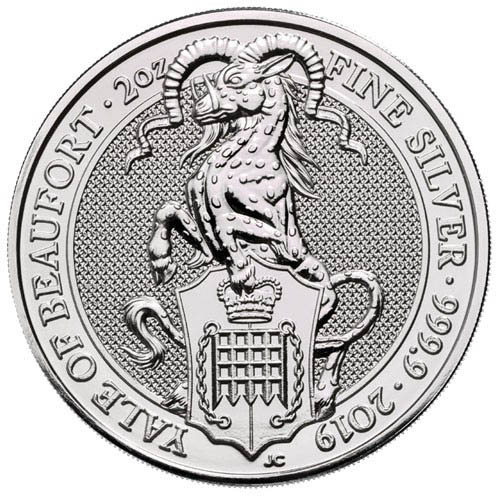 Silver.com is proud to offer the first-ever 2 oz silver bullion coin from the Royal Mint of England as part of its Queen’s Beast Series. This 10-coin collection of silver for sale proved immediately popular upon its 2016 release with the Lion of England design. Today, 2019 2 oz Silver British Queen’s Beast Yale of Beaufort Coins are available to you online at Silver.com as the seventh design of the collection.

Lady Margaret Beaufort was the only child and heiress of John Beaufort, the Duke of Somerset. She was married four times throughout her life, but the most significant of her marriages was her second to Edmund Tudor. Her marriage to Edmund produced her only child, Henry. He would go on to become King Henry VII, taking the crown from the Yorkist monarch King Richard III following the latter’s defeat by the former at the Battle of Bosworth Field in 1485. Henry VII established the House of Tudor dynasty, making Margaret the mother of a king and the grandmother of the infamous King Henry VIII.

All of the 2019 2 oz Silver British Queen’s Beast Yale of Beaufort Coins in this listing are available to you in Brilliant Uncirculated condition. The coins are offered inside of protective individual packaging, mint tubes of 10 coins, or Monster Boxes of 200 coins with 20 tubes.

On the obverse of all 2019 Silver Queen’s Beast Yale of Beaufort Coins is the fifth-generation effigy of Her Majesty from Jody Clark and the Royal Mint. Designed in 2015, it captures Elizabeth II in right-profile relief at the age of 89 as she wears the Royal Diadem crown.

The reverse of 2019 2 oz Silver British Queen’s Beast Yale of Beaufort Coins includes the symbol of Lady Margaret Beaufort. The design includes both symbols used by her and her son. The Yale, a mythical antelope- or goat-like beast, supports a shield with white-and-blue quarters. In the center is a golden portcullis, something her son Henry VII used in his personal badge.

Please don’t hesitate to reach out to Silver.com with any questions you might have when shopping. You can call us at 888-989-7223, chat with us live online, or simply send us an email.