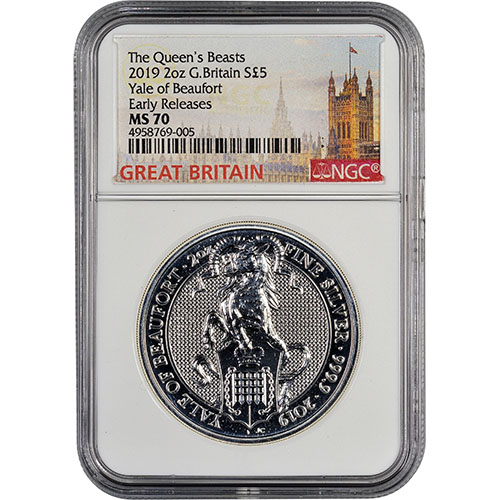 The Yale of Beaufort is one of the more stunning and unique releases in the Queen’s Beast Series of silver bullion coins from the Royal Mint of England. The collection features each of the 10 heraldic beasts from the history of the British monarch depicted in the form of statues at the 1953 coronation ceremony for Queen Elizabeth II. The 2019 2 oz Silver British Queen’s Beast Yale of Beaufort Coin is now available to you for purchase online at Silver.com in perfect condition.

Lady Margaret Beaufort’s shield and supporting animal came to the Royal Arms of England through her son, King Henry VII. Henry VII was the founding monarch of the House of Tudor, a dynasty that would rule from the start of his reign in 1485 to the death of his granddaughter, Queen Elizabeth I, in 1603.

The Yale is a mythical creature that is often depicted with the body of either a goat or an antelope. The beast features horns on its head and the tusks of a boar on its snout. The original Yale of Beaufort design included a Yale supporting a shield with blue and white quarters, as well as a golden portcullis at the center, the latter of which was a badge used by Henry VII.

On the reverse of 2019 2 oz Silver British Yale of Beaufort Coins is a modern twist on this design. A powerful Yale with long, twisted horns supports the same shield carried by Lady Margaret Beaufort, without the golden portcullis included. The Yale’s image can be altered by its bearer to reflect either grace and elegance, or strength and determination.

These 2019 2 oz Silver British Queen’s Beast Yale of Beaufort Coins are available to you in perfect condition. Mint State 70 coins have full, original mint luster with no detracting flaws. The Early Release designation indicates the coins arrived for grading within the first 30 days of their initial release from the Royal Mint.

We encourage Silver.com customers to call us at 888-989-7223. You can also connect with us online using our live chat and email address features.