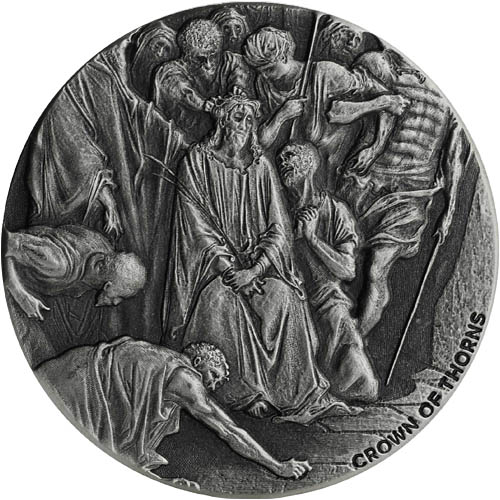 The Biblical Silver Coin Series from the Scottsdale Mint combines some of the great works of 19th-century artist Gustave Dore with biblical themes and modern coining technology to produce a stunning collection of silver for sale. The mint releases five designs per year and launched the collection back in 2015. Today, 2019 2 oz Silver Crown of Thorns Biblical Coins are available to you online at Silver.com.

Each coin in the Silver Biblical Coin Series from the Scottsdale Mint is struck in high-relief on an antique, rimless blank. The combination of an antique polish and a rimless blank gives each one of these modern silver bullion coins the appearance of ancient coinage.

All of the 2019 2 oz Silver Crown of Thorns Biblical Coins available to you here today come with a stunning Bible-themed presentation box that is perfect for housing and displaying the product. The coins come with an individually numbered Certificate of Authenticity and the matching serial number is found laser-etched onto the coin’s outer edge.

On the reverse of 2019 Silver Crown of Thorns Biblical Coin is the image of Jesus. He is seated in the center with several Roman soldiers standing around him. This side bears a replica of artwork originally completed in the 1860s by Gustave Dore and once displayed in London. The design reflects the passages in Mark 15:16-19.

During his trial and execution by crucifixion, Jesus was mocked for his followers’ belief that he was the King of the Jews. Roman soldiers, as depicted on the reverse of this coin, brought him to the courtyard of the Governor’s palace and dressed him in purple robes. Once dressed, the soldiers wove a crown of thorns and forced it onto his head. They then proceeded to spit on him and kneel in mocking worship as they pronounced “Hail, King of the Jews.”

The obverse of 2019 2 oz Silver Crown of Thorns Biblical Coins includes an effigy of Queen Elizabeth II. Her Majesty is featured here in right-profile relief in a design from Raphael Maklouf that served as the official portrait of the Monarch on British coins from 1984 to 1997.

Please don’t hesitate to contact Silver.com with questions. You can call us on the phone at 888-989-7223, chat with us live online, or simply send us an email.