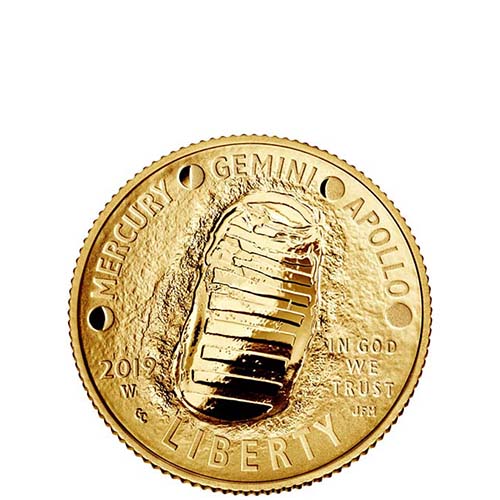 In July 1969, the United States landed the winning blow in the Space Race against the Soviet Union by sending two men to the surface of the moon and returning them safely back to Earth. The achievement of NASA’s Apollo 11 mission met the goal President John F. Kennedy set for the nation in 1961 and the US Mint celebrates the 50th anniversary of this landmark accomplishment with five coins for sale. Right now, the 2019 $5 Gold American Apollo 11 50th Anniversary Coin from the series is available to purchase online at Silver.com.

Each of the 2019 $5 Proof Gold American Apollo 11 50th Anniversary Coins in this listing comes with beautiful proof visuals that include frosted designs and mirrored background fields. The coins are housed inside of protective plastic capsules and displayed with a US Mint box. These proof gold coins also come with a Certificate of Authenticity from the US Mint.

Proof Gold American Apollo 11 50th Anniversary Coins are one of five options offered by the US Mint to mark 50 years since Apollo 11 landed mankind successfully on the moon for the first time ever. Other issues in the collection include a 1 oz silver bullion and proof coin, as well as a 5 oz proof silver coin and a gold bullion coin.

The obverse of the 2019 Proof Gold American Apollo 11 50th Anniversary Coins features the design of an astronaut’s footprint on the moon as left behind by Neil Armstrong and Buzz Aldrin as the pair spent 21.5 hours exploring the lunar surface.

On the reverse of 2019 $5 Proof Gold American Apollo 11 50th Anniversary Coins is the image of a photo taken by Buzz Aldrin while he and Neil Armstrong were on the moon’s surface. Aldrin’s photo captured the reflection in his visor of Armstrong standing on the moon, the American flag planted nearby, and the Eagle lunar lander. Armstrong’s visor and helmet act as a frame for the design field on this side. These beautiful coins, like the others in the collection, are curved coins with convex reverse design fields and concave obverse fields.

If you have any questions, please feel free to connect with Silver.com. Our customer service team is available to you at 888-989-7223, online using our live chat, and via our email address.