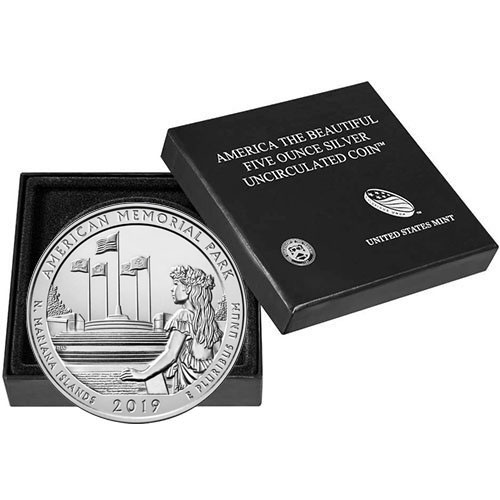 After the devastating attack on US forces at Pearl Harbor, Hawaii, in December 1941, the Imperial Japanese began invading and capturing US territorial islands throughout the Pacific Ocean. Among the many sites were battles occurred between the United States and Japan was the Northern Mariana Islands. American Memorial Park recalls the bravery of those who defended the islands. Right now, 2019-P 5 oz Burnished Silver ATB American Memorial Park Coins are available to purchase online at Silver.com.

Each of the 2019-P 5 oz Burnished Silver ATB American Memorial Park Coins in this product listing comes to you with its own presentation box from the United States Mint and an included Certificate of Authenticity. The burnished coins in the ATB Series are vapor blasted after minting for a matte finish.

As America struggled to get on a forward-leaning war footing following the surprise attack at Pearl Harbor, its first objective was to reach out and start taking back US islands and free other locations in the Pacific occupied by Imperial Japanese forces. American Memorial Park on Saipan in the CNMI is a living memorial to the 4,000 US forces and indigenous residents of Saipan who sacrificed to fight for the island. The park contains swimming, picnicking, hiking, and other outdoor recreational venues.

The reverse of 2019-P 5 oz Burnished Silver ATB American Memorial Park Coins features the image of a young Chamorro woman looking at the Flag Circle and Court of Honor at the center of the park. Chamorro people are the indigenous inhabitants of Saipan, Guam, and the other islands of the CNMI.

On the obverse of 2019-P 5 oz Burnished Silver ATB Coins is the image of President George Washington. John Flanagan designed this bust of the nation’s first president for the US circulation quarter in 1932 on the anniversary of his 200th birthday. He used a 1786 bust of Washington from William Cousins as the inspiration for his design. The “P” mint mark from the Philadelphia Mint is on this side of the coins.