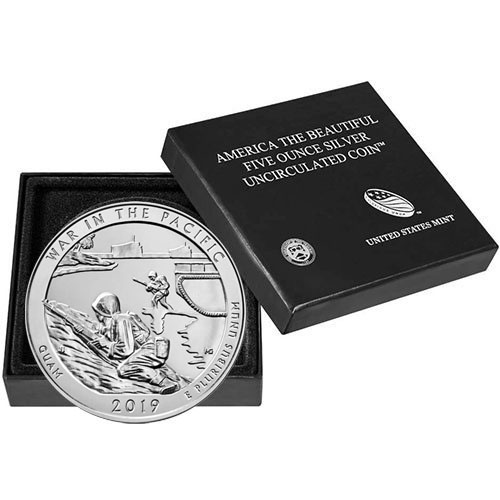 The United States of America was the only nation in World War II to successfully fight a two-front war. Deploying forces to Europe to counter the Nazis and to the Pacific Ocean to push back Imperial Japan, the US had to employ different fighting tactics in these theaters. The island-hopping campaign of the Pacific Theater was known for its brutal military encounters. Today, 2019-P 5 oz Burnished Silver ATB War in the Pacific National Historical Park Coins are available to you online at Silver.com.

The island of Guam is the furthest US territory from the mainland United States. Known as the “Place Where America Starts its Day,” Guam was one of the first US islands to fall to the Imperial Japanese and one of the last to be won back during World War II. War in the Pacific National Historical Park preserves many of the places of historical significance on the island dating to the war.

All of the 2019-P 5 oz Burnished Silver ATB War in the Pacific National Historical Park Coins in this listing come to you with a presentation box for the individual coin from the United States Mint. Included with your purchase is a Certificate of Authenticity from the US Mint as well.

The reverse of 2019-P 5 oz Burnished Silver ATB War in the Pacific National Historical Park Coins includes the view as United States military forces storm the beaches of Guam during the Second Battle of Guam in the summer of 1944. The battle featured brutal jungle warfare against a Japanese enemy determined to fight to the last man. In fact, the last Japanese soldier discovered on the island surrendered in the 1970s.

On the obverse of 2019 5 oz Burnished Silver War in the Pacific Coins is a portrait of President George Washington. This portrait captures the first Commander-in-Chief in left-profile relief and has the “P” mint mark on this side as well.

Please don’t hesitate to reach out to Silver.com with any questions you might have when you buy silver. You can call us on the phone at 888-989-7223, chat with us live online, or email us directly.