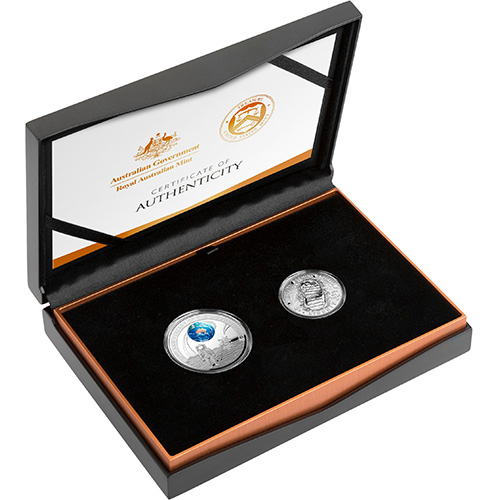 In celebration of the 50th anniversary of the Apollo 11 mission by NASA, sovereign mints around the globe issued silver bullion coins to mark the occasion. In this stunning two-coin release, the Royal Australian Mint and United States Mint combined to issue a collectible series. Right now, 2019 Proof Australian Lunar Landing Silver and Cupro-Nickel 2-Coin Sets are available to purchase online at Silver.com.

Each of the 2019 Proof Australian Lunar Landing Silver and Cupro-Nickel 2-Coin Sets listed here include two sovereign coins. The coins are individually encapsulated and housed inside of a presentation two-coin case. The themed shipping case reads “Apollo 11 50th Anniversary Moon Landing” and the coins come with a Certificate of Authenticity signed by the directors of the Royal Australian Mint and the United States Mint.

On the obverse of the Australian coin is the image of Queen Elizabeth II. This is the right-profile portrait of the Queen designed in 1998 by Ian Rank-Broadley. Included on this side of the coins is the Parkes radio antenna that captured American film broadcast transmissions from the moon and sent them around the globe to some 500 million people watching the moon landing on television. The reverse face depicts a scene from the moon with an American astronaut and the image of planet Earth with full, brilliant colorization in the distance of outer space.

The obverse of the American coin in this set features a depiction in Buzz Aldrin’s visor that captures Neil Armstrong, the Eagle lunar lander, and the American flag on the surface of the moon. On the reverse of these coins is the outline of an astronaut footprint on the lunar surface.

If you have any questions about this silver for sale, please feel free to reach out to Silver.com. Our customer service team is available to you at 888-989-7223, online using our live chat, and through our email address.