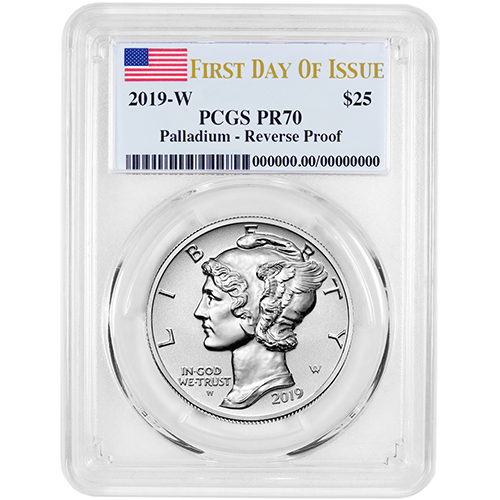 For 2019, the United States Mint offered the Palladium American Eagle as a reverse proof specimen with a much higher 30,000-coin mintage. The reverse proof Palladium Eagles have clear, mirrored design elements with frosted background fields.

The obverse of 2019-W 1 oz Palladium American Eagle Coins features the image of Winged Liberty. This left-profile portrait was created by Adolph A. Weinman for the US circulation dime in 1916 and remained on that coin until 1945.

For the reverse of 2019 Palladium American Eagle Coins, another Weinman design features. This image of an American bald eagle on a rocky cliff edge includes the bird with its wings raised behind it and its talons clutching the branch of a young sapling growing on the cliff. This image was designed by Weinman in 1907 for the American Institute of Architects medal.

These 2019-W 1 oz Palladium American Eagle Reverse Proof Coins are available with perfect PR70 certifications from the PCGS. This grade indicates coins with full, original mint luster and no detracting flaws. Additionally, the First Day of Issue label means the coins were received for grading by the PCGS within the first 24 hours of release from the US Mint.

We encourage Silver.com customers to call us with questions at 888-989-7223. You can alternatively reach out to us on the web using our live chat and email address options.