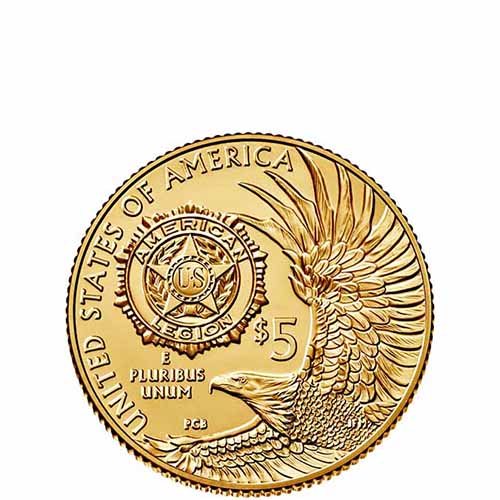 To celebrate the 100th anniversary of the American Legion’s founding by American Expeditionary Forces at the end of World War I, the United States Mint offers both silver and gold coins for sale with 2019 date marks. There are three different versions of the coins available, each with distinct designs. Right now, 2019-W $5 Gold American Legion 100th Anniversary Coins are available to purchase online at Silver.com.

Each of the 2019-W $5 Gold American Legion 100th Anniversary Coins in this listing come to you with protective capsules surrounding the coin and a US Mint black, velvet-lined presentation box to hold the coin. Included with your purchase is a Certificate of Authenticity from the United States Mint.

On the obverse side of 2019-W $5 Gold American Legion 100th Anniversary Coins is the design of the Eiffel Tower with a large “V” engraved over it. The symbolism marks the victory of the Allies over the Central Powers during World War I. the Eiffel Tower symbolizes the founding of the American Legion in Paris, France, in March 1919 by members of the American Expeditionary Forces stationed in the city in the aftermath of the war.

The reverse face of 2019-W Gold American Legion 100th Anniversary Coins includes the image of a soaring American eagle, the symbol of the nation in war and peace. The American Legion emblem is also featured on this side of the coin.

The United States Mint strikes the silver dollar coins in the collection at the Philadelphia Mint, while these gold bullion coins are struck by the West Point Mint.

If you have any questions, please feel free to call Silver.com. You can reach us at 888-989-7223, chat with us live online, or email us directly.