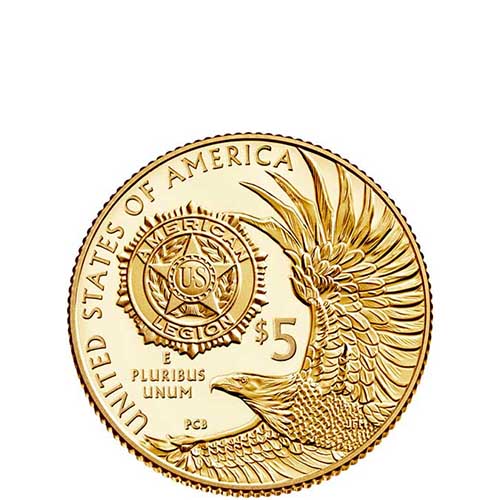 Those collectors who buy gold from the United States Mint will find a unique collectible item available in 2019. The American Legion, an organization that promotes the needs of US veterans, was founded in Paris, France, by US service members in the American Expeditionary Forces in 1919 and celebrates its 100th anniversary in 2019. Today, 2019-W $5 Proof Gold American Legion 100th Anniversary Coins are available to you online at Silver.com.

All 2019-W $5 Proof Gold American Legion 100th Anniversary Coins in this listing are housed individually inside of capsules and presented in US Mint black display boxes that include a Certificate of Authenticity with purchase. The proof coins in this series have matte finishes with mirrored backgrounds.

The reverse of 2019-W $5 Proof Gold American Legion Coins includes the American Legion emblem in the upper-left design field and a soaring American bald eagle in the lower-right field. The inscriptions on this side include “United States of America” and “E Pluribus Unum.”

Please feel free to reach out to Silver.com if you have any questions. You can contact our customer service team at 888-989-7223, online using our live chat, and via our email address.