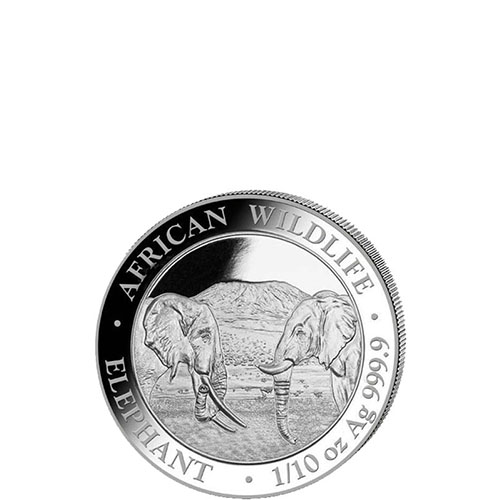 The Silver Somalia Elephants from the Bavarian State Mint are among the most popular silver coins for sale in the world. Introduced in 2004, the series features a total of six different weights as of 2017. The series is best known for its use of new reverse designs of the African bush elephant each year. Now, 2020 1/10 oz Silver Somalia Elephants are available to you for purchase online at Silver.com.

The obverse design of the 2020 Silver Somalia Elephants includes a depiction of the coat of arms for Somalia. This design includes two leopards supporting the shield in the coat of arms for the Somali Republic. The shield itself consists of a crowned seal with a single star set against a backdrop of horizontal lines. Fern leaves and spears cross below with a banner draped across the two items.

On the obverse face of 2020 1/10 oz Silver Somalia Elephants is an image of two bush elephants in side-profile relief. The creatures are shown standing at the center of the design field facing inward toward one another. Only the neck and heads are visible. The elephants are both mature adults with long ivory tusks, but the elephant on the left is clearly the elder of the two as its tusks are much longer.

These 2020 1/10 oz Silver Elephants are available to you individually or in bulk. Individual silver coins ship with protective plastic flips while multiples ship inside of mint tubes of 50. All of the coins in this listing are in Brilliant Uncirculated condition.

Silver.com customer service is available to assist you with questions at 888-989-7223. Alternatively, you can connect with us online through our live chat and email address features.