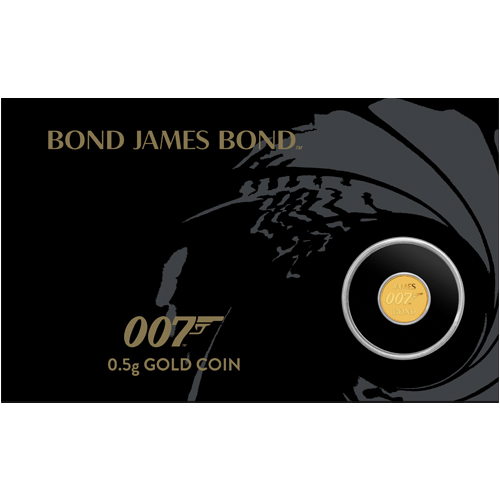 The James Bond franchise is one of the most beloved fictional characters in the world. Known to readers around the globe, James Bond was created by writer Ian Fleming in 1953. Fleming’s original works included 12 novels and two short-story collections about the fictional British Secret Service agent. Today, 2020 1/2 Gram Gold Tuvalu James Bond Series 007 Coins are available to you online at Silver.com.

For nearly 70 years now, readers around the globe have had a chance to fall in love with the MI-6 agent known as James Bond. Fleming’s original works were first issued in 1953 and his beloved character reached an even wider global audience starting in 1962 with the release of the first feature film, Dr. No.

All 2020 1/2 Gram Gold Tuvalu James Bond Series 007 Coins available here come with a beautiful presentation card. The black presentation card features a small capsule in the lower corner that holds the individual coin. All of the coins are in Brilliant Uncirculated condition. The black cards feature artwork recreating the iconic opening scene from all Bond feature films that include a stylized gun barrel that eventually focuses in on the silhouette of Bond. With an unlimited mintage, the Perth Mint will strike the coins to match demand through the end of the 2020 calendar year.

Queen Elizabeth II is found on the obverse of 2020 Gold Tuvalu James Bond Series 007 Coins. This design was created in 1998 by Ian Rank-Broadley as the fourth-generation British effigy for national currency. It came to Australian and Commonwealth coins in 1999 as the fifth-generation depiction for nations in the South Pacific region. The right-profile bust of the Queen is one of the most commonly featured throughout the Commonwealth.

James Bond’s iconic “007” code name logo is featured on the reverse of 2020 1/2 Gram Gold Tuvalu James Bond Series 007 Coins. James Bond’s code name as a member of MI-6 is “007,” and the iconic logo of the franchise uses the “7” in the code name to form the butt and grip of a pistol while incorporating a stylized gun barrel and trigger.

Please feel free to contact Silver.com if you have questions about this gold for sale. We can be reached on the phone at 888-989-7223, online through our live chat, and via our email address.