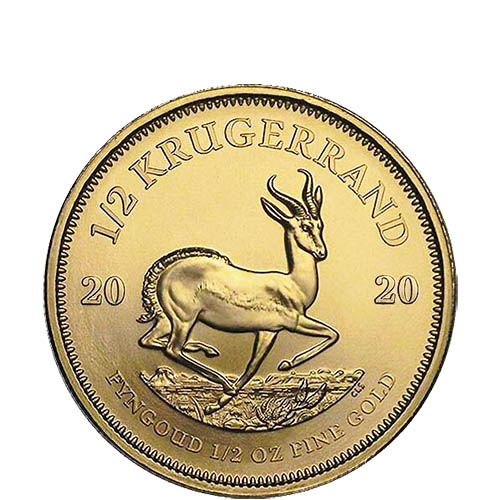 Gold Krugerrand coins from the South African Mint and Rand Refinery come in four weights each year. The 1 oz coin is the longest-running with a five-decade history of production stretching back to 1967. The fractional-ounce coins have been produced over the course of more than four decades dating back to 1980. Now, 2020 1/2 oz Gold South African Krugerrands are available to you for purchase online at Silver.com.

Gold Krugerrands are legal tender in South Africa, but the coins are also the only major gold bullion coins in the world with no issued face value. The legal tender status of the coin is enshrined in law through the South African Reserve Bank Act of 1989. The coins were named for the national denomination, the Rand, and Paul Kruger.

The Krugerrand Series from the South African Mint and Rand Refinery now come in a variety of different options. In 2017, the first-ever non-gold versions of the coin were introduced with a Platinum Krugerrand and Silver Krugerrand. The latter coin is available as a bullion and proof specimen, with a 2 oz silver proof introduced in 2020.

Paul Kruger is depicted in left-profile relief on the obverse of all 2020 Gold South African Krugerrands. The image features the former president with a suit and his long beard. Kruger was affectionately known as Oom Paul, which is Afrikaans for Uncle Paul. Prior to his term in office as president, he had served in a triumvirate of leaders guiding the nation toward independence.

The Springbok antelope is a medium-sized antelope and features each year on the reverse of the 2020 1/2 oz Gold South African Krugerrands. This image captures the springbok in right-profile relief as it elegantly moves across the plains of southern Africa. The designs on the Gold South African Krugerrand were designed by Otto Schultz (obverse) and Coert Steynberg (reverse).

These 2020 1/2 oz Gold South African Krugerrands are available to purchase individually or in multiples of 15 coins. The individual coins ship in a protective flip and the multiples come with a mint tube. Each coin is in Brilliant Uncirculated condition.

We encourage Silver.com customers to call us about gold for sale at 888-989-7223. You can also connect with us on the web through our live chat and email address features.