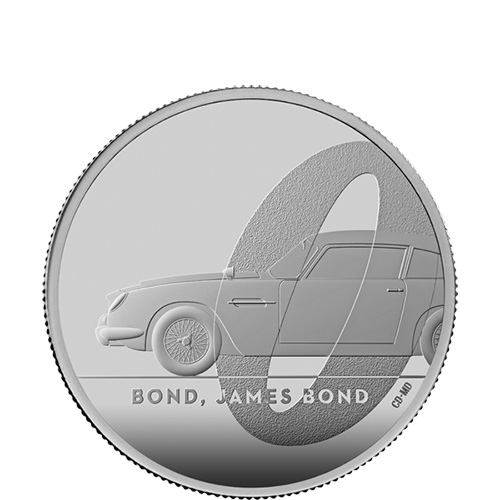 The new silver coins for sale from the Royal Mint of England in the James Bond Series honor the fictional British super spy. Arguably one of the most well-known Brits around the world, even though he’s fictional, Bond has been entertaining generations of people from the original written novels to the latest feature films on the big screen. Right now, 2020 1/2 oz Proof Silver British Bond, James Bond Coins are available to purchase online at Silver.com.

Each 2020 1/2 oz Proof Silver British Bond, James Bond Coin in this product listing comes with a display box that boasts a clear lid. The case and coin are housed inside of a protective display box that comes with a Certificate of Authenticity. Included in the COA booklet is a background story on the arrival of James Bond feature films on the big screen. Each coin is a proof specimen with frosted designs and mirrored fields.

British author Ian Fleming developed the James Bond figure in 1952. He wrote about the exploits of agent 007 at MI6 over the course of more than a decade, with other authors taking up the mantle after his death to expand the written Bond series to a total of 12 novels and short stories. When Bond came to the big screen in 1962, Sean Connery was the leading man and portrayed Bond in the first five consecutive films and six of the first seven, returning to the role after George Lazenby played the role in 1969’s On Her Majesty’s Secret Service.

Queen Elizabeth II is depicted on the obverse of the 2020 1/2 oz Proof Silver British Bond, James Bond Coin in right-profile relief. This design is the fifth-generation effigy of the Queen to appear on British coins during her reign and was created in 2015 by Jody Clark. The design shows the Queen wearing the George IV State Diadem Crown commissioned in 1820.

A DB5 Aston Martin is depicted in the reverse design of the 2020 Proof Silver British Bond, James Bond Coins. The Royal Mint issues these coins with a design from Matt Dent and Christian Davies that depicts the popular sports car driven by Bond characters in the early feature films.

If you have any questions, please don’t hesitate to ask. Silver.com customer service is available to you on the phone at 888-989-7223, online using our live chat, and via our email address.